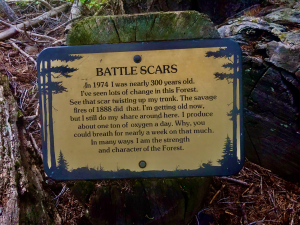 One month shy of the middle of 2021, I came across a faded sign tacked to a post in front of a ridiculously tall tree. “BATTLE SCARS,” it said at the top. Then, this: “In 1974, I was nearly 300 years old. I’ve seen lots of change in this Forest. See that scar twisting up my trunk. The savage fires of 1888 did that. I’m getting old now, but I still do my share around here. I produce about one ton of oxygen a day. Why, you could breathe for nearly a week on that much. In many ways I am the strength and character of the Forest.” 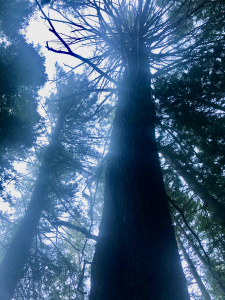 After 15 months of cloistered Covid life, my husband and I were on a glorious June road trip through the West. We met this old tree in Idaho’s Sawtooth National Forest. We’re not young either, but we sure were feeling young at the time—on the road, fully vaccinated, confident that the best of 2021 was yet to come. We hadn’t yet heard much about Delta, let alone Omicron. We didn’t yet know what a “heat dome” was. We were nervous about summer wildfires, as always, but didn’t yet know that by the end of year, more than seven million acres of these United States would burn.

Now, as a new year begins, I don’t feel so young anymore. I think I might be about 300 years old. I’m feeling my battle scars. Some of them are so fresh it’s too soon to pull the stitches out.

You might think I’m heading in a bleak direction here. But the paradoxical truth of 2021 is sort of like a scene from a World War One movie, in which the mud-covered British boy-soldiers are huddled in the trenches, savoring a cup of hot tea and sharing biscuits sent from home. It might be the best tea and the best biscuits they ever tasted. One or more of them might be dead within the hour, but this exact moment—this tea warming them from the inside out, this biscuit that makes them think of their family’s favorite biscuit tin, which they can picture in its hallowed spot on the kitchen counter, framed in a shaft of tea-time sunlight—this one moment is their own pure treasure, and nothing can take it from them, not even a grenade.

That ancient tree in the Sawtooth Forest outlasted the savage fires of a century ago and kept right on producing a ton of oxygen a day. Its great age—or why not say “her” great age, in the spirit of Suzanne Simard’s outstanding 2021 gift of a book, Finding the Mother Tree—has not dimmed her moment-by-moment commitment to respiration. To silently feeding the forest, like a genius chef in the kitchen of the world’s most bountiful yet invisible restaurant. Or like a mother packing biscuits and tea bags to send to her soldier son. 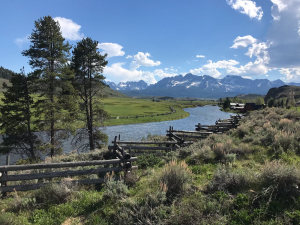 Three hundred years old in 1974: that would make her 347 years old when we met her, just before the middle of 2021, on our get-out-of-jail-free road trip during that sliver of time that came after being fully vaccinated and before the drumbeat of Delta.

If I have hope, as 2022 begins, it lies in moments like meeting the Sawtooth mother tree. Someone put up a sign, 47 years ago. How many people have seen that sign and stopped to think about what trees do and how badly we need them?

If I have hope, it lies in moments that had nothing to do with the Big Lie, or the lies of the anti-vaxxers, or all the polls and Covid graphs and wildfire maps that tunneled themselves into our daily lives, in 2021, like soul-killing bark beetle larvae.

If I have hope, it is because of East 20 Pizza in Winthrop, WA, which spent the summer subsisting on donations and feeding the firefighters who worked nonstop to keep the flames out of our state’s beloved Methow Valley. 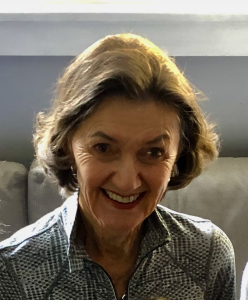 If I have hope, it is because of my beautiful, wise stepmother, who spent her last day of life offering words of comfort to as many family members as she could, one or two at a time, before she let go, knowing that we would all be together to grieve and cry and laugh and tell stories, because it was Christmas Eve. She refused to let cancer or despair have the last word.

Mother trees. They’re everywhere. Urging us to get along. To stop the posturing and get to work: supporting each other, protecting each other, nourishing each other: the way trees do, reaching out to each other underground, with the help of legions of under-appreciated micro-organisms.

Last January, I had that thrill of optimism pounding in my heart: vaccines! A new president! Hooray! This year, I feel like a battle-scarred 347-year-old. But I’m wired for hope. And so I look for it, and I swear to you I feel the hum of it, somewhere below ground. It’s the hum of all the other scorched but stubborn optimists in the world, once again ready to give a new year a chance.