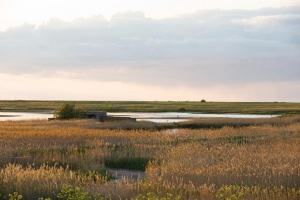 I once visited a bird hide (or blind, as we call them in North America) in the wet, windswept fens of East Anglia, far to the northeast of London. That is all. Please forgive me, birders of the world; I remember nothing, at least nothing that has to do with birds.

I was 19, and a newly arrived exchange student at the University of East Anglia, whose concrete, mid-1960s buildings resemble oversized bird hides. UEA is on the outskirts of Norwich, which is still the lively market town it was when William the Conqueror built his castle there a thousand years ago. I loved Norwich, but I was always game for an excursion. Bird-watching: why not? 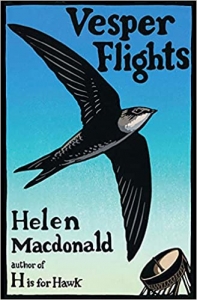 That faded memory tugged at me through all 458 pages of Helen Macdonald’s book of essays, Vesper Flights. My acquaintance with the young man who invited me to the bird hide was so fleeting that I can only remember a bit of what he looked like: droopy mustache, watch cap, wellies. A sweet smile. Not actually a UEA student; I met him at a party. When I told my cross-the-hall friend Bridget about his invitation, she decided she and her boyfriend Chris would go birding too. They would drive me, and we would meet my new friend there.

So off we went in Chris’ Morris Mini, across the low-slung fens, to a long, equally low-slung wooden shack that blended right into the landscape, which of course was the point.

My birder friend waved at us.

“Hi!” I shouted happily. He put his finger to his lips, as did Bridget and Chris.

“You mustn’t talk,” Bridget whispered. “The birders will get very cross with you. When we go inside, we’ll take our seats on the bench and just watch quietly.”

I remember peering through the narrow horizontal windows at the marshy landscape. Birder Friend handed me his binoculars, and told me where to look.

I looked as hard as I could, and saw only cattails waving.

Because I so recently finished reading Vesper Flights, I can guess that on that long-ago afternoon, the birders were expecting a flock of wintering waterfowl or perhaps a few of the migratory birds known to stop over on their way from the Arctic to Africa.

“Sitting in the dark for an hour or two and looking at the world through a hole in a wall requires a meditative patience,” Helen Macdonald writes. “The longer you sit there, the more you become abstracted from this place, and yet fixed to it.”

At 19, meditative patience was not my strong suit. 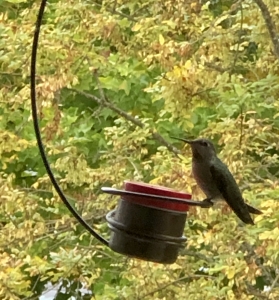 Four decades later, given the habits I’ve developed during these pandemic months—watching the hummingbirds at the feeder; checking my small roster of plants, indoors and out and every day, for evidence of growth—I believe I might now do better at spotting birds from a bird hide.

What I do remember of that late-fall day is that it was awfully cold, and we couldn’t talk. And I had not been the kind of highly-tuned-to-wildlife kind of child that Helen Macdonald had been. Though I had happy memories of Girl Scout hiking trips, those memories 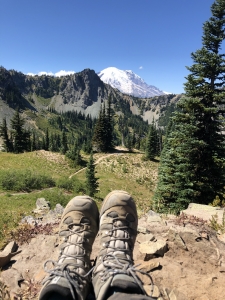 didn’t include much in the way of birds or mammals; they were focused more on mountain peaks, tall trees, rushing rivers and alpine wildflowers. Not exactly the kinds of landscapes that train a nearsighted child’s eye to find birds in a fen.

But that’s what makes Macdonald such a wonderful writer. She can take the most unlikely birder, or reader—me—to worlds I never would have spotted on my own: which was exactly the kind of reading experience I badly needed, here in October 2020.

In an essay called “High Rise,” Macdonald writes about visiting the top of the Empire State Building with ornithologist Andrew Farnsworth, who tracks the many birds who migrate at night, high above New York City. The birds she saw through Farnsworth’s high-

powered binoculars “were mostly unidentifiable streaks of light, like thin retinal scratches or splashes of luminous paint on a dark ground,” Macdonald writes. “For days afterwards, my dreams are full of songbirds, the familiar ones from woods and backyards, but also points of moving light, little astronauts, travelers using the stars to navigate, having fallen to Earth for a little while before picking themselves up and moving on.”

In the book’s title essay, “Vesper Flights,” she takes us into the complex, high-altitude world of swifts, which she calls her “fable of community, teaching us about how to make the right decisions in the face of oncoming bad weather, in the face of clouds that sit like dark rubble on our own horizon.”

As I write, the November 3 election looms like a cloud of dark rubble. And real clouds loom too: the clouds full of rain and sleet and snow that will drive us indoors for the winter.

But over the week or so in which I read Vesper Flights, I felt a bit like one of Macdonald’s “little astronauts,” navigating high above the manic patterns of earth-bound human beings; the patterns which have so obsessed me since the beginning of March. Coronavirus infection and death rates and all their attendant statistics. Election polling of every kind. Now I’m obsessed with early voting numbers. It was a relief to rise up above all that, with Macdonald and the birds. 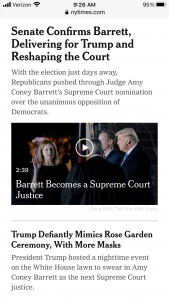 There were also the Senate hearings regarding the nomination of Amy Coney Barrett to the United States Supreme Court, during which I thudded to earth several times. In fact, I was going to try to write something focused solely on Barrett, but then I thought: no. The world does not need more gnashing of teeth over Barrett, especially now that she is confirmed. The world needs more Helen Macdonald.

I will say this much: once upon a time, I too was a charismatic Christian. I closed that door before I went off to England and learned what a bird hide was. But there was a time when my journal included entries like this:

One of the most important times in the last five months was going to Camp. My counselor, Minnie, was really neat and the Lord taught me a lot thru her that I really needed to know – about sex, about a woman’s role in living for God, and about spiritual gifts. Now I know I can be content, although sometimes my nature fights it, with the fact that woman is secondary to man, and her role is to obey and help him. That certainly doesn’t mean God thinks less of women or loves them less! Women are very important to God and are a necessary part of His plan. I know I can accept all this as God’s will now, because I’ve read and studied it in the Bible. And I can’t contradict God’s own word!

It is painful to look back on that girl, who was not some other girl. She was me.

And that fifteen-year-old me leaped to attention this month, as Barrett—born the year I wrote those words—began to dominate the news.

What fascinates me, and maddens me, about Barrett, is that she reminds me of my teenaged self, with my black-and-white thinking; my love of clear biblical instruction—and yet at the same time, she’s a paragon of secular achievement. I can’t claim that I don’t understand the appeal of the People of Praise, the patriarchal, mostly Catholic, charismatic group to which she belongs, because there’s this historic inner part of me that does. That longing for certainty and clarity, for truth and beauty, as they are represented by faith, in a world that is so dark and seems to be going off the rails? I get that.

But I also get why Helen Macdonald proved to be the perfect antidote to this old spiritual PTSD that Barrett churned up in me. It’s because Macdonald—like my birder friend of long ago—is a believer: not in the God of the Bible, but in what she calls numinous moments: “times in which the world stutters, turns and fills with unexpected meaning. When rapturousness claims a moment and transfigures it. The deep hush before an oncoming storm; the clapping of wings as a flock of doves rises to wheel against low sun; a briar stem in the sun glittering with blades of hoarfrost. Love, beauty, mystery. Epiphanies, I suppose. Occasions of grace.”

Forty years ago, I did not have that kind of numinous moment in the bird blind. And yet I do remember that I went on that excursion.

Maybe my brain deemed it worth filing away because going on an impulsive bird-watching expedition was one tiny antidote, of sorts, to the evangelical way I had viewed the world only a few years before I landed in England. Like the birds Macdonald strained to see as they flew through the night over Manhattan, I was a little astronaut, freshly flown far away from the view of the world Minnie the camp counselor had presented to me. I was looking for new ways to map my life. New flight paths through the cosmos. That no one had ever suggested visiting a bird hide to me before was exactly what made it appealing.

Barrett has made her adherence to originalism (a “type of judicial interpretation that aims to follow how the constitution would have been understood at the time it was written,” according to the Oxford dictionary) very clear. What I don’t understand: why would a person of faith think that God would favor a strict, originalist view of the law over a compassionate, Jesus-inspired view?

And if she’s an originalist, is it not presumptuous of her to even seek this position? The founding fathers certainly did not envision women as justices of the Supreme Court.

I do, however, believe they envisioned justices who were anti-rigidity. Who understand that the world changes. That every document in human history, including our constitution, including the Bible, deserves to be seen through the fresh eyes of each new generation.

And if there are new birds, moving in new patterns, a birder must note these changes. Perhaps new protections will be needed. The hide itself might have to be relocated. Sitting still does not mean you’re not prepared to act nimbly and decisively.

Another recent essay of mine, “Regeneration,” was recently published in About Place Journal. Honored to be there!