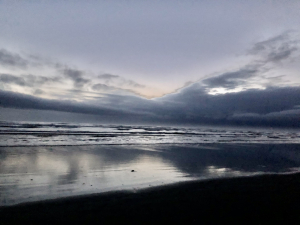 The trick, we both knew, was not to think too hard. My husband and I dropped our towels. We ran right in, like five-year-olds, and dunked under the waves, like clumsy grownups. We stumbled out, wet and cold and laughing.  One plunge was enough. This was the Washington coast, out where the Pacific Ocean rolls in all the way from Japan and smashes the sand so hard an intact seashell is hard to find, where the snowy rivers of the Olympic Mountains pour right into the surf. 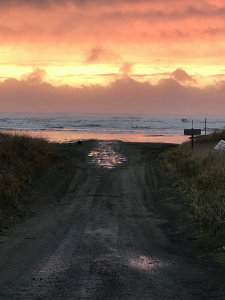 One plunge was enough to make me feel—newborn.

Like the ocean had just washed away all the bullshit I’d allowed to build up in my mind and body and self and soul over the past two and a half years. All the piling on of the world’s problems, the ones none of us can solve though we know we have to try because some progress is better than none. All the sorrows, universal and personal, that Covid has brought. And, for me, all the anguish of feeling frozen, as a writer, after I hit pause on the Book That Apparently Wasn’t Working and then realized I hadn’t hoarded quite enough confidence to get going on my next project. 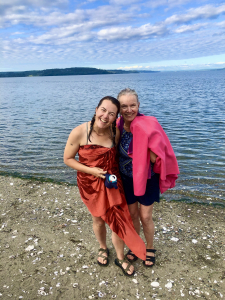 We plunged into the ocean again the next day. Later that week, my daughter and I took a plunge in the coldest part of Hood Canal. Since we got back to Seattle, I’ve gone swimming six times. Every time, I relive that baptismal moment on the Washington coast. Every time, I feel newborn. Ready to start growing again, to start shooting out new neural connections, which is something scientists now believe we continue to do all our lives.

Growth is good. Growth is the opposite of fallow, which is not a bad word, but for now, I’ve had enough of it.

Fallow sounds prettier than it feels. It’s easy to chafe against the quiet of it; harder to accept the need for it. My own small acre of writing has been mostly fallow for some time now. Other writers’ acres blossomed and fruited and went crazy with color and growth during these pandemic years, but not mine.

I have had moments of terror, of believing that the soil is dead. That all the micronutrients have been washed away by my own erosive carelessness. By which I mean allowing myself to drown in every flash flood that came along—via the news or via the events of my own life—and using it all as an excuse not to write.

But lately, I’ve been seeing evidence of growth returning to my field, of my old rootstock eking out a green shoot or two. I’m scribbling ideas. Post-its are turning up on my bedside table, on the kitchen counter, tucked into pockets; they bear cryptic phrases that only make sense to me: “prairie sky,” “ballet,” “Polk Directories,” “that Greg Brown song.” I see inspiration where before I saw nothing. I see how some of the things I’ve written but haven’t felt were good enough to publish on this blog or anywhere else are not in fact garbage, they are compost, they are metaphors or ideas or themes that might just flower if I give them water and sunlight.

Some months ago, on one of my first in-person outings to my local bookstore, Third Place Books in Seward Park, I bought a used copy of a 2003 poetry anthology called In Praise of Fertile Land. It is full of what I need right now. “Unnoticed in the earth, worms/ are busily, brainlessly, tilling the soil,” writes Lynn Ungar in her poem, “Groundhog Day.” I like to think that during those months of paralysis and panic, helpful worms were diligently tilling the soil of my brain. Patiently turning it in the dark into something new.

“One nub of growth/ Nudges a sand-crumb loose,” Theodore Roethke, son of a greenhouse gardener, wrote in his poem called “Cuttings.”

One nub of growth. One little nudge.

Roethke, who taught at the University of Washington, died in 1963. Ungar, born a year after Roethke died, is a Unitarian Universalist minister, and if her name rings a bell, it’s because she published a poem called “Pandemic” in March of 2020 that went viral.

Reach out your words. Reach out all the tendrils of compassion: that is how I want to write. And how I want to be, as I come up from under the ocean I had been so sure would be too cold for my cautious fallow self.

On October 1, I’ll be teaching my first in-person class in two and a half years, at Hugo House. The theme, “More Questions than Answers: When Memoir Writing Becomes the Story of the Search,” fits right in with the exploratory writing I want to do this fall.