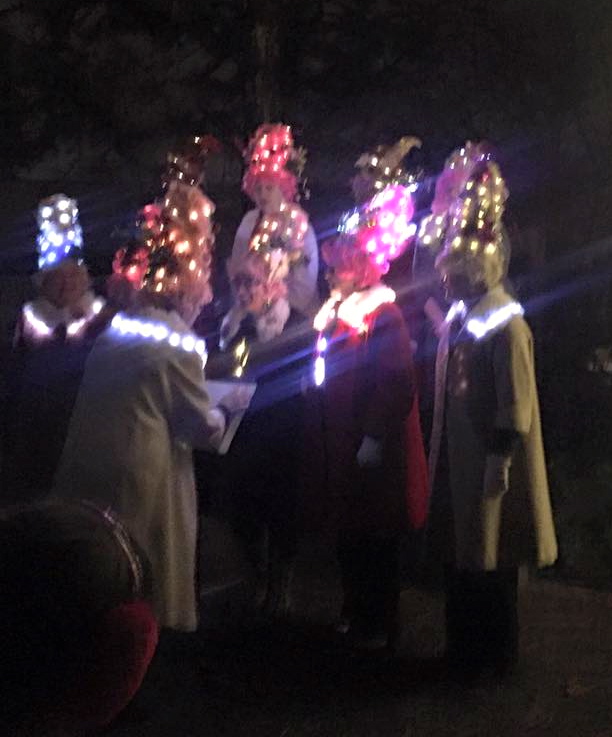 I was in it for the Beaconettes. What’s not to love about a holiday choir decked in sky-high beehive hairdos festooned with strings of lights? So I braved the bone-chilling Seattle December rain and headed for the annual tree-lighting at our neighborhood’s new gathering spot, a mini-park called the Columbia City Gateway. My husband was waiting for me, hot chocolate in hand. Aahhh.

We tried to figure out where the tree was. Turns out it was a telephone pole. This would be a pole lighting. But that’s OK—it’s Columbia City, where even a pole lighting in a downpour can somehow still promise to be festive.

There were some mercifully short introductory remarks, and then the night’s celebrity guest was introduced: Father Christmas himself, or, as the announcer added, “Father Solstice, if you prefer.” And what a

I was kicking myself for not having added one more layer to my winter-rain getup and feeling anxious to see the Beaconettes before I crossed over into hypothermia. My husband saw me shivering and put his arms around me. Then Father Solstice stepped up to the microphone, wrapping us all in his gentle yet commanding presence: the kind of presence that long years of addressing such crowds can give a man, especially one with mythical tendencies.

I’m paraphrasing here, but this is what I remember of what Father Solstice said: “I won’t talk long, I promise. I know you’re wet and cold. But I just want to remind you about some refugees you might have heard about. Two thousand years ago, they were looking for a place to stay, because one of them was about to have a baby. Door after door was barred against them. And I’m bringing them up because this year, we’re more tempted than ever to bar our doors against the refugees of the world. More tempted than ever to act out of fear, instead of love.”

“Who remembers,” Father Solstice went on, “when Seattle was declared a Sanctuary City in the 1980s? Maybe it’s time to reclaim that vow.”

The soggy crowd was quiet.

“OK,” said Father S, snapping us back to the present. Let’s count down and light that pole!”

We all counted down, clapping and cheering when the telephone pole lit up. Then the Beaconettes stirred and glowed and we crowded in so we could hear them over the deluge as they belted out their trademark carols featuring rewritten lyrics about contemporary life in Seattle, which this year included riffs on marijuana, Amazon, Fitbits and Bertha the wayward tunnel-digger. They were hilarious, as always.

But it was Father Solstice who stayed with me, as we walked off into the dark.

Is it still possible to be a sanctuary city? What it technically means is that Seattle is a city where police officers are not allowed to ask about an individual’s immigration status. What “sanctuary city” also meant, in the 1980s, was a place where many churches and activists provided sanctuary for refugees fleeing violence in Central America and, later on, other turbulent places in the world.

Is it possible, in these times, not to offer sanctuary? In his Sunday speech from the Oval Office, President Obama called the terrorists of the Islamic State—which is neither reflective of more than a tiny, warped sliver of Islam, nor a state—“thugs and killers.” How can we not offer sanctuary when murderous thugs are driving waves of terrified people into exile? How can we be the ones who cry out, “no room at the inn?”

And yet: what kind of sanctuary are we, when our country is flooded with firearms, bedecked and bedazzled with them, to a degree that must make the violent thugs of the world quiver with envy? When our politicians shout, “yes, bar those doors!” even as they encourage the flow of guns from the factories and into the hands of everyone who wants one or two or two dozen, whether they’re terrorists, armed robbers, or duck hunters?

Turns out Father Christmas/Solstice is a long-time peace activist in Seattle named Bob Barnes. I had the honor of meeting him, and thanking him for what he said, after the pole-lighting; an event, I told him, that I won’t soon forget. Thanks, Beaconettes, and thank you, Bob. The holiday season in Seattle may be dark and sodden, but it has its bright moments. “Bright,” as in happy strings of lights on beehive hairdos and on one telephone pole. And “bright” as in: a man in a green cloak and furry crown, willing to shine a light right where we need it most.

In the mood for another seasonal tale? Here’s one I called “A Manger Story,” published this week on the Patheos Good Letters site.

Radio news: After four years, The Restless Nest has retired from its weekly radio spot on KBCS. This will give me more time to work on some longer projects. But I’ll continue to post here at least a few times a month.