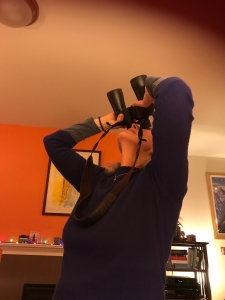 “Mom is trying to see a bug on the ceiling using binoculars,” my husband texted our grownup children recently. “Should we be concerned?”

“The pandemic has altered everyone’s perspectives in different ways,” my daughter responded. “Or is she just delirious from her reading??”

Among the many first-ever virtual experiences I had this year was to participate in an online literary reading hosted by About Place Journal. I was thrilled that they had published my essay, “Regeneration,” and equally thrilled to be part of the reading. Alas, we had technical problems. The show did go on, but it was stressful.

Remember Willie Nelson’s classic breakup song, “Hello, Walls?” –In which he talks to the walls, and the window (“is that a teardrop in the corner of your pane?”) and, finally, the ceiling? (“I’m gonna stare at you awhile.”) In the final verse, he addresses them all: “We gotta all stick together or else I’ll lose my mind.” 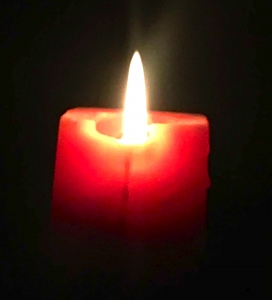 Me. My laptop. My walls, windows and ceiling. After the tech-trauma of our reading, I guess I just wanted to figure out something in my tiny world, like: what the heck is that winged insect on our ceiling?

Instead, it became kind of a Lucy Lucy Lucy moment of hilarity, which really was much more cathartic than actually figuring out what the creature was. (A moth?) And I learned something: binoculars don’t really work very well for indoor wildlife viewing.

As I wrote about in my last post, six whole weeks ago, I’ve never been handy with binoculars. 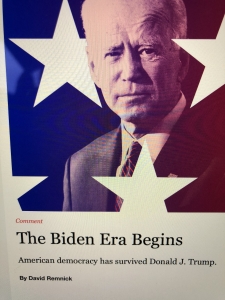 It’s been quite a month and a half, hasn’t it? There was the election. Then there was the counting. The morning I will never forget was November 7, 2020. I was walking in the woods at the end of our block, yammering into iTalk about how all the trees are suddenly bare and the leaves underfoot are like exhausted election workers—which I actually thought was a metaphor I could someday do something with—but instead, in an instant, it became locked in my memory as the nutty thing I was doing when my phone started clanging like a hand-bell. First my husband: “CNN just called it. Biden is president.” Then more and more. I ran the rest of the way home and into his arms and just started crying.

And now, in mid-December, I think we’re past our last lawsuit/attempted coup.

Meanwhile, there was Thanksgiving versus the pandemic, and unfortunately the pandemic won. And now we’re in a very scary place.

But there was also the news about the vaccine. Vaccines, plural. And so we’re in a scary but hopeful place. 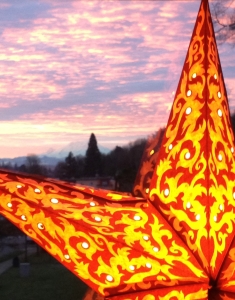 Which is fitting, in this darkest season of the year. This Advent season, which is all about daring to hope. “There are always newer skies into which God can throw stars,” wrote poet Ann Weems.

I am not a poet. But I do believe in the power of writing, which is why I’m hosting Writing Against the Darkness WA on December 21. It’s a fundraiser for the Alzheimer’s Association, in conjunction with their Summer Solstice campaign known as #The Longest Day, but held instead on the shortest day of the year. Which is perhaps when we writers need it more. I hope you’ll join us, or consider donating. We’ll (virtually) gather at sunrise (don’t worry, that’s 7:55 am, Seattle time) for some inspiration, then go about our days (which will include time for writing, whether it’s an hour or seven) until sunset (4:21 pm), when we’ll reconvene online, and share. All are welcome, whether you’re a frequent writer or not. 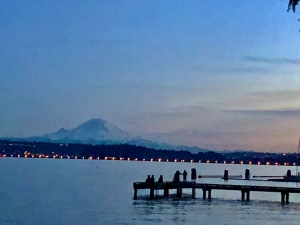 Years ago, I wrote this, about one of our family’s favorite holiday foods.

And this, about my mom and a Christmas pageant.

There’s always much to write about in a dark but hopeful time.

Happy Holidays from the Restless Nest.