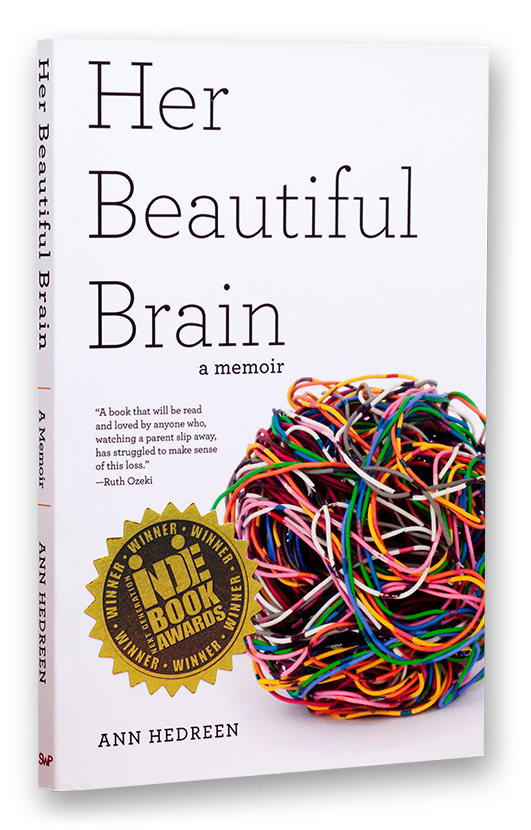 “A book that will be read and loved by anyone who, watching a parent slip away, has struggled to make sense of this loss.” –Ruth Ozeki

“A daring and ambitious memoir that bestows unexpected rewards on the reader.” –Seattle Times

Her Beautiful Brain (She Writes Press) is a story for the sandwich generation. It’s about my remarkable mother—a copper miner’s daughter who was divorced twice, widowed once, raised six kids, went to college in her forties so she could support us as a schoolteacher—and how her younger-onset Alzheimer’s disease forever changed not only her life and mine, but the lives of our entire sprawling clan: my five siblings, our spouses, Mom’s 14 grandchildren and two living ex-husbands. We are a family-tree-sized example of the ripple effect of this insidious brand of loss.

From Seattle to Haiti to the mine-gouged Finntown neighborhood in Butte, Montana where she was born, Her Beautiful Brain travels the terrain of an unpredictable and heartbreaking illness: one that currently affects more than 5.8 million American families—a number that is expected to double or even triple by mid-century.

Without quite knowing it at the time, I began working on Her Beautiful Brain in 2004, when my husband and I made a documentary film about my mother called Quick Brown Fox: an Alzheimer’s Story (Watch via Vimeo on Demand or buy the DVD.

The Wall Street Journal, June 29, 2015: “My Spinal Taps for Alzheimer’s” (Inspired to volunteer for research? Go to the Alzheimer’s Association’s Trial Match page.)

“Her Beautiful Brain is an inspiration. As a daughter who nursed her own mother through the ravages of Alzheimer’s, I was deeply moved by Ann Hedreen’s heartfelt tribute to her mother’s courage and suffering, and her searingly honest reflections on the confusion wrought by this disease. It’s a book that will be read and loved by anyone who, watching a parent slip away, has struggled to make sense of this loss.”
–Ruth Ozeki, author of A Tale for the Time Being

“Ann Hedreen’s memoir is the real deal. In lucid prose, she scavenges her family’s history, looking for clues about her mother and herself. Hedreen’s writing is deeply loving, sharply unsentimental, and a joy to read.”
–Claire Dederer, author of Poser: My Life in 23 Yoga Poses

“Ann Hedreen has done an elegant job of capturing the past, present and future of a complicated journey. If you are in the midst of caregiving for a loved one with dementia, if you have Alzheimer’s or a related dementia, or if you have concerns about cognitive impairment, you’ll find comfort in Ann’s reflections and musings on her mother’s Alzheimer’s and her and her family’s response to it. Ann’s insights and wisdom are relevant and practical.”
–Keri K. Pollock, Alzheimer’s Association

“In Her Beautiful Brain Ann Hedreen writes movingly of a vibrant, engaged, life-affirming, highly intelligent woman who overcame many obstacles in life only to succumb to early-onset Alzheimer’s. That this woman was also her mother makes the story a double one: not just one person’s descent into oblivion but its deep impact both on her daughter and an entire family. The ups and downs of Alzheimer’s research, what exactly is happening in that “beautiful brain” of her mother’s, the mining pollution in Butte, Montana, and its possible link to her mother’s disease, the triumph of Arlene’s own love and affirmation expressed through a new generation who memorializes her triumphantly all play a role in this beautifully written, evocative memoir.”
–Victoria Nelson, author of Gothicka and The Secret Life of Puppets

“Her Beautiful Brain is Ann Hedreen’s exceptionally beautiful book about a mother who lives and dies with Alzheimer’s. In the lives depicted here, people are moved to act on what they feel, whether that feeling is popular or not:  Ann’s mother becoming even more outspoken when language seems to be leaving her, Ann’s own complicated feelings of being a daughter and mother to her own children, and finally the meaning of betrayal and forgiveness around her own husband’s extramarital affair. The rationale of “reality” is constantly brought into question here and in the end, through exquisite writing, Her Beautiful Brain describes not only a mother and a daughter, but a world.”
–Michael Klein, author of The End of Being Known

“Ann Hedreen takes us on two journeys: along the byways of her mother’s estimable life; and through that same mother’s harrowing descent into the oblivion of Alzheimer’s disease—a journey millions of American families will share. Her Beautiful Brain is a moving elegy to a loved one and to the power of love.”
–Ron Reagan, author of My Father at 100

Watch the book trailer on Vimeo or Youtube. Read the prologue, excerpted in Crosscut.