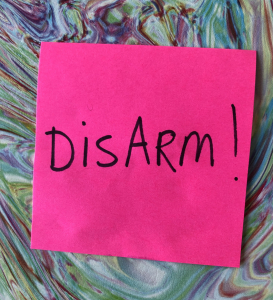 “DISARM!” declares the pink post-it in the back of my journal. It’s been there for a few weeks now, and I can’t seem to throw it away. The note dates from a getaway spent with friends at a borrowed beach cottage. We thought we might be expected to set the alarm at night, and I thought I might be the first one to open the door in the morning. So I put post-its on the door, the coffeepot, and my journal.

But then we didn’t set the alarm. We opted instead for open windows and fresh marine air. The word, however, stayed with me. Because I am badly in need of dis-arming.

This summer, I have set all kinds of alarms against, well, feeling. Because there’s just too damn much to feel. And for me, along with feeling goes writing anywhere except in my journal. Because when I sit down to write with intent to share, as I am right now, I come up against that timeworn question that is the title of this post. Honesty: good or bad?

I’m not talking here about truth versus lies. I’m talking about being honest about how you feel.  About expressing your real feelings versus repressing them. 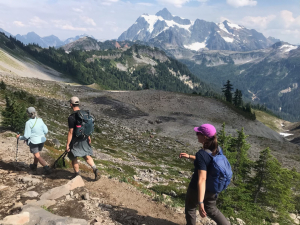 Honesty is good, when I write about how sweet it has felt this summer to be at the beach or in the mountains or forests with family or with friends. Is honesty bad when I write about how worried I am about every place I love, as temperatures spike and wildfires rage throughout the West? Is it bad to be honest about how despondent I feel when I realize that it’s just going to get worse and worse, every summer? 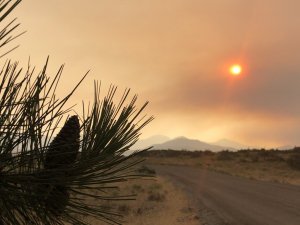 Because we’ve allowed climate change to get out of control? Because we can’t quit all our favorite energy-sucking habits?

Is honesty bad when I write, in late August 2021, about how once again we have to worry about stopping at a rural mini-mart where you’re not sure if anyone is vaccinated, and they sure as heck aren’t masked, and you sure wish you weren’t still thinking about such things all the time? Is honesty bad when you wonder just how long the nurses and doctors can hold out this time around?

Is honesty bad when I write that I’m afraid to write? Because I fear judgment, including my own?

A week ago, after twisting all night on that old familiar rack of insomnia, I finally crawled out of bed at about 5 am and had myself a good cry. It was about how dishonest I felt after going weeks without crying about everything that deserves to be cried about, from the personal to the global. It was about how I worry that this constant repression of feeling is going to warp me, us, all of us: our relationships and dreams and creative drives and health and well-being.

It was about Afghanistan falling so swiftly. About Haiti in dire straits once again.

When you’ve been to a faraway place, even just once, it becomes real to you for the rest of your life. For me, Haiti is such a place. I went there when I was a young TV news producer and my sister was in the Peace Corps. My boyfriend/cameraman and I had persuaded our news director that if he let us go on this trip, we would bring back a week’s worth of stories and a half-hour special report.

The earthquake that hit Haiti on August 14 killed 2,200 people and injured and displaced many thousands more. As the news alerts popped up, so did my memories of a country that, even 34 years ago, with a brief whiff of democracy in the air, was more bruised and battered than anywhere I’d ever been.

Meanwhile, Afghanistan. I have not been there, but I have a tiny connection to the place, a feeling that just a bit of me has somehow seen it first-hand, just enough to make it real. My husband (who was that boyfriend in Haiti, 34 years ago) and I have produced two short films for a nonprofit that has been building and operating schools for girls in Afghanistan for 20 years. And so when I see the horrifying headlines, my mind goes to all the photos the nonprofit sent us to use in our films: all those smiling girls, so happy to be in school. Now, the photos and videos have all been taken down, for the protection of the girls and their teachers.

My prayer is that they and their families will somehow survive. That it is better to have been to school at all, than not at all. That no one can reach inside them and remove what they have learned. Since the Taliban were last in power, twenty years ago, literacy in Afghanistan has increased from abysmal (estimates vary wildly) ­­to, according to UNESCO, 43 percent overall and 65 percent for youths aged 15 to 24. That cannot be undone. But they’re in such grave danger right now.

Being honest about how I feel means I have to be honest about having no words of wisdom and reassurance with which to end this post. So I’ll leave you with an image, which you’ll have to imagine, since it would have felt like an invasion of privacy to take a picture of it: in the middle of an informal but long-term encampment outside Jefferson Park in Seattle, hanging from a tree between two tents, there is a punching bag.

I wonder if it gets some use after dark, when those of us who are lucky enough to be housed are not likely to walk by and watch, or judge.

I wonder if throwing punches at that bag might be a whole lot more effective at dealing with Everything than setting alarms around the perimeter of your feelings. When what you really need to do is to dis-arm. Have a good, honest cry. Let the fresh air pour in.

Writers: I have two classes coming right up: The Practice of Slow Writing at Hugo House, and Memoir Writing Workshop (a new class; a little different than my usual Intro to Memoir Writing) at Seattle Central College. Both classes are on Zoom. Click the links to learn more and to register.