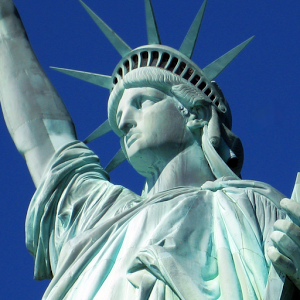 Her name was pinned to her coat, because she didn’t speak a word of English. But Lydia Westerback made it from Ellis Island to Hanna, Wyoming, where her future husband was waiting for her. He’d been waiting for nine years. It took that long for Lydia’s heart to heal after the death of her first fiancé, back in Finland. Nine years for her heart to stop hurting enough to see what Viktor Warila was offering her: not just love and marriage but a whole new world. She was 31. Her choice was stark: impoverished spinsterhood in Finland, under the rule of the Russian Czar? Or marriage, and America, with a friendly man whose letters she enjoyed but who she had not seen in nearly a decade?

Lydia and Viktor were my great-grandparents. Like all my forebears, they came here with little money and lots of hope. This might be your story too, or a part of your story. Whether it was nearly five centuries ago in Pilgrim New England, whether it was one or two centuries ago in the great immigrant waves that gave us Ellis Island and the Statue of Liberty and Emma Lazarus’ beautiful poem—you remember, “give me your tired, your poor, your huddled masses yearning to breathe free.” Whether it was 30 years ago or three years ago, we were all poor travelers at the table. Or as President Obama put it in his announcement last week of major executive action on immigration, “we know the heart of a stranger—we were strangers once too.”

Seattle Times columnist Danny Westneat wrote beautifully this weekend on the same theme. Many others have, too. So my story, of Lydia and Viktor and their reunion at a Wyoming coal camp in 1899, is hardly unique—and that, of course, is exactly the point. Exactly why I’m giving thanks, this year, for President Obama’s action, because it is such an important reminder of who we are, as a nation. Why we exist. What we represent to the world. The new, jillion-dollar fence on our southern border is a shameful testament to who we are at our worst—selfish. Fearful. Ditto Congress’ inability to pass immigrant reform legislation. But the president’s executive order, imperfect though it is, is an urgently needed course correction back towards what Lazarus’s poem invoked us to be, when she imagined the Statue of Liberty saying to the world: “Send these homeless, tempest-tossed, to me. I lift my lamp beside the golden door!”

The golden door of which she wrote led, of course, not to treasure but to backbreaking work. Just as it still does. Nothing is more wildly off the mark than recent characterizations of immigrants, legal or illegal, as “takers.” My great-grandfather was a coal miner. My great-grandmother ran a small boarding house. Then, with six young children to support, they farmed a homestead claim near Red Lodge, Montana.

I thought of them—and of Lydia’s long train trip across the West to meet her future husband—when my husband and I watched a haunting new documentary called Who is Dayani Cristal, produced by actor Gael Garcia Bernal, perhaps best known here for playing Che Guevara in The Motorcycle Diaries. Bernal also narrates and appears on-screen in short re-enactments which help tell the story of one Honduran immigrant whose body was found in the Sonoran desert. Watch it, if you can: it’s available online. It will make you thankful for how we as a nation took a step last week back towards everything the Statue of Liberty stands for. “A mighty woman with a torch,” Lazarus called her: “and her name? Mother of Exiles.”