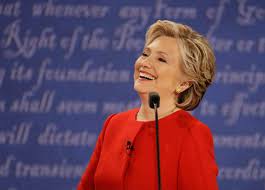 Here’s what gave me joy during the first presidential debate: Hillary Clinton’s smile. Sure, she might’ve practiced in front of the mirror, and I don’t fault her for that. As she told Donald Trump, she believes in preparing, both for the debates and for being president. But what her smile signaled so effectively was something else, something I would call her new imperfectionism. It’s no wonder she looked so joyful: if you’re Hillary Clinton, it must be a great relief to have moved beyond the futile grind of flat-out perfectionism. And I think we women can all learn from her.

I’m not arguing that she was not brilliant that night. She was. But her tone, her ease, and best of all that bemused, transcendent smile told me that not only is she confident and ready to govern, she is now beyond inured to the type of male posturing in which Donald Trump invests all of his strategic energy. This is an important trait in a first female president. It is one she has honed over the decades, especially as Secretary of State. While Trump has been sharpening his negotiating skills by belittling tenants, employees, contractors, and beauty pageant winners, Clinton has been steadily building her ability to hold her own with hard-to-handle men, from her husband to five-star generals to heads of state.

Remember when she was first lady, and she baked those cookies just to show she could? That was perfectionist Hillary, responding to a media pile-on that was all about how uncomfortable the country was to find out that the new first lady intended to use her brain while residing in the White House. How great it must feel to not have to pull that kind of stunt anymore. 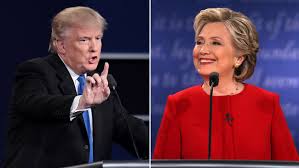 I’m sure debating Donald Trump is not her idea of a fun gig. But what we saw Monday night is that Trump’s behavior is not so shocking to most women, including Hillary Clinton.

During the debate, my daughter texted from a bar in a mountain town that Trump was “giving her PTSD for every time she’d had a horrible demeaning argument with a man.” As her mother, it makes me sad to know that at 27, she’s already had that experience plenty of times. As a fellow female human being, my reaction is: of course she has, because she likes to talk about issues that matter, which means she is invariably going to feel that familiar frustration: the kind that simmers and bubbles as you get interrupted, talked over, put down, dismissed, patronized, ignored.

Men are allowed to be imperfect—temperamentally, intellectually, physically, behaviorally—by both their fellow men and by women. Women are not. It starts early, and it never ends. And one good thing that just might come out of the frenzied conversations of this election season is this: maybe we will finally embrace the beautiful reality of the imperfect female role model. The woman who is not both brilliant and a cookie-baker.

Men are also allowed to put on weight, wear strange orange comb-over hairdos, scowl, roll their eyes and mug for the camera, even as they criticize the appearance of a beauty pageant winner or the stamina of a former Secretary of State.

My own father thinks it’s OK to ask me questions like this one, over lunch a few weeks ago: “Do you think Hillary has put on weight?”

“Dad. I cannot believe you just said that,” I replied, or at least I think I did. How can I remember, when all my hot buttons were instantly on blood-red alert?

But Hillary’s debate smile is giving me a courageous new model. Hey, grown-up Ann, her smile tells me, don’t take the bait. Don’t sputter and turn red and instantly recall how fat you felt in college when you were binge-eating cereal out of the box. Instead, smile at your dad. Practice in front of a mirror. Give it that serene, Hillary-esque, “Wow, you’re old-fashioned, but I’m OK with that, because I have moved on with my own evolution!” kind of feel.

And that’s the new post-perfectionist Hillary Clinton. She knows she’s smart and strong and imperfect too. What a great role model for us all.

Seattle friends and film-lovers: our new documentary, Zona Intangible, makes its festival debut at the Seattle Latino Film Festival this Saturday at 2pm at the Varsity Theatre. Join us!