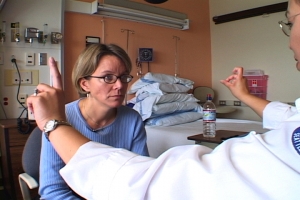 This is a local-hero story, about a pair of heroes you probably have never heard of. Their secret world headquarters is an unglamorous maze of cubicles in the sprawling Veterans Affairs Puget Sound Health Care headquarters on Seattle’s Beacon Hill. They look like they could be Clark Kent’s father and Lois Lane’s mother. But for twenty years, they’ve been doggedly researching two illnesses most of us would rather not think about: post-traumatic stress disorder—PTSD—and Alzheimer’s disease. As one of them likes to quip, they specialize in “people who can’t remember and people who can’t forget.”

I first met Doctors Murray Raskind and Elaine Peskind ten years ago, when I began work on a documentary film about Alzheimer’s disease. After I interviewed them, I wound up becoming one of their control research subjects. Dr. Peskind is known for her expertly gentle touch in administering lumbar punctures—better known as spinal taps. She has tapped me five times to extract samples of cerebro-spinal fluid for use in Alzheimer’s research. All I have to do is lie curled up and still for several minutes: a pretty modest contribution to the cause of finding out what might cause, or cure, an illness that currently affects five and a half million Americans.

Raskind and Peskind’s PTSD research happened almost by accident. Because the University of Washington’s Alzheimer’s Disease Research Center is physically located at the VA, Dr. Raskind, a psychiatrist, was asked, about twenty years ago, to advise a support group for African-American Vietnam veterans. Of the many issues members of the group were facing, one of the most troubling was that they couldn’t sleep. Every night, like clockwork, PTSD triggered such vivid, adrenaline-soaked nightmares they were bolted from bed into not merely wakefulness but a combat-ready, hyper-vigilant state, as if they were literally reliving their war experiences.

Dr. Raskind had a hunch about a drug he thought might help them, a generic medication called prazosin that was prescribed for high blood pressure. It worked by blocking brain receptors for norepinephrine, a sort of partner to adrenaline. Could this calm the nighttime adrenaline storms the vets described?

It did. But it took nearly two decades for Raskind and Peskind to prove it, with the help of many veterans and active-duty soldiers, all suffering from PTSD nightmares, who were willing to endure double-blind studies, even if it meant they might have to take a placebo for months. They were “doing this for their buddies,” a psychiatrist on base said. You can read more about it in an article I wrote for the March 2014 issue of Seattle Met magazine.

Writing that story and hearing about what it really means for a scientist to have a hunch, follow it, find funding, recruit volunteers, set up and carry out longitudinal studies—I realized what a simple, short-attention-span kind of existence I lead. Here, in a hometown chock-full of local heroes like Raskind and Peskind.

There is so much research going on in Seattle it’s hard to quantify. But here’s one statistic: the University of Washington School of Medicine is first in the nation among public medical schools in federal funding for research. Areas of study include: infections diseases, genotyping and global health, with projects in more than 90 countries.

We are also home to major research institutes such as Fred Hutchison Cancer Research Center; the Allen Institute for Brain Science, Benaroya, whose emphasis is auto-immune disorders and Seattle Bio-med, focusing on infectious diseases. Our hospitals—Swedish, Virginia Mason, Seattle Children’s and many others—conduct research of their own. Then there are the funders—the Gates Foundation may be the largest, but there are many, many more.

The best thing about volunteering for medical research: the opportunity to meet a few of these local heroes. They’re very serious about changing the world. How exciting to be able to lend them a hand.

This Sunday, March 16 at 3pm, in celebration of the publication of  Into the Storm: Journeys with Alzheimer’s (edited by Collin Tong), I’ll be reading, along with some of the other authors, at Elliott Bay Bookstore.

Registration is now open for my non-credit, no stress Memoir Writer’s Workshop at Seattle Central Community College. This is a new class for writers who feel ready to write 5-7 pages a week. Six Monday nights, starting April 7.
The Restless Nest is on the radio every Tuesday morning at 7:45 a.m. KBCS.fm; 91.3 in the Seattle area. Podcasts available.