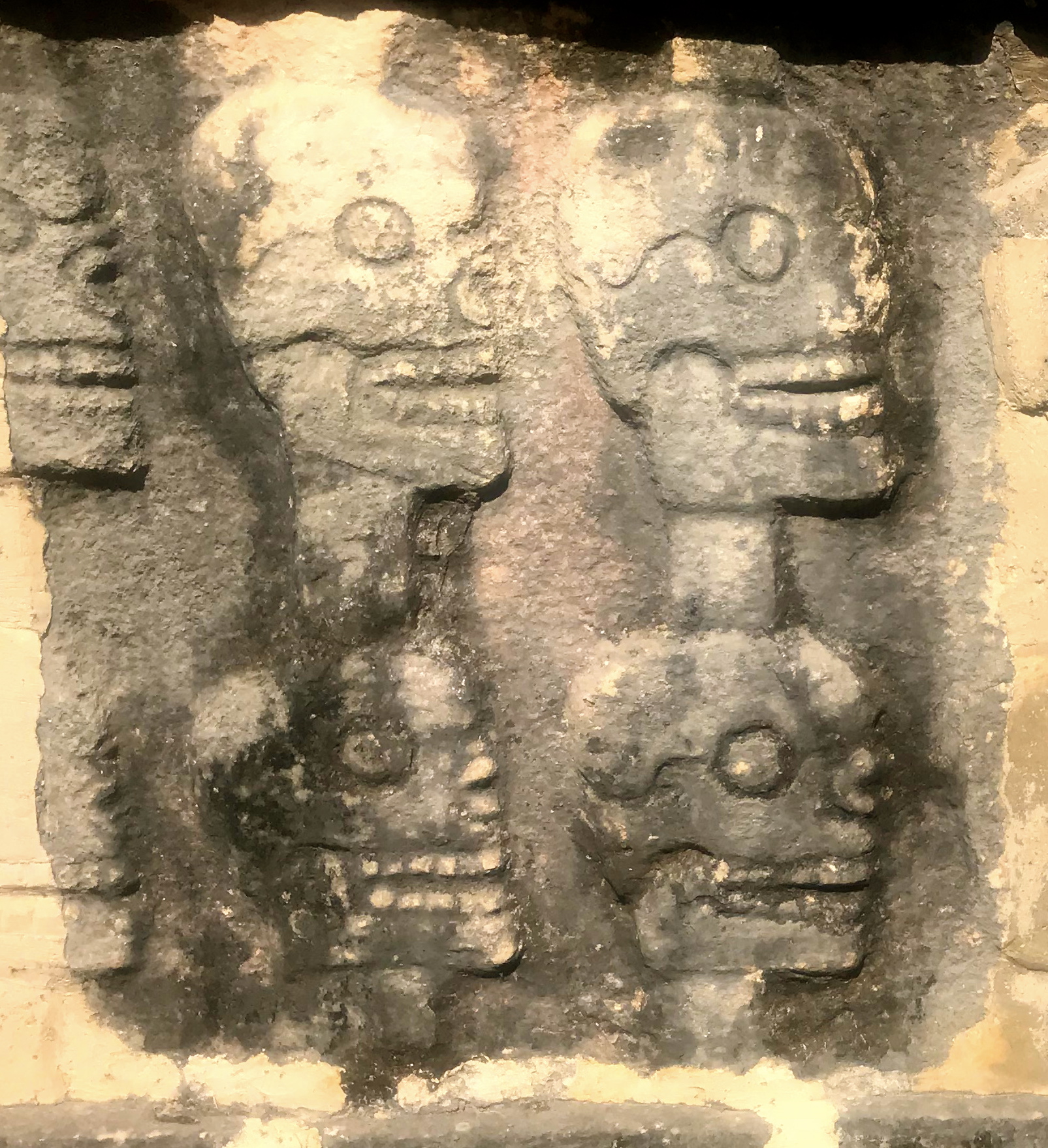 On the day that students and the people who love them marched in cities and towns around the world, my husband and I walked the wide boulevards of Chichén Itzá. If our trip to Mexico had not been planned so far in advance, we too would have been marching in our hometown. Instead, heat-dazed, we gazed at the ruins of the ancient city that has long been known as a site of copious human sacrifice. 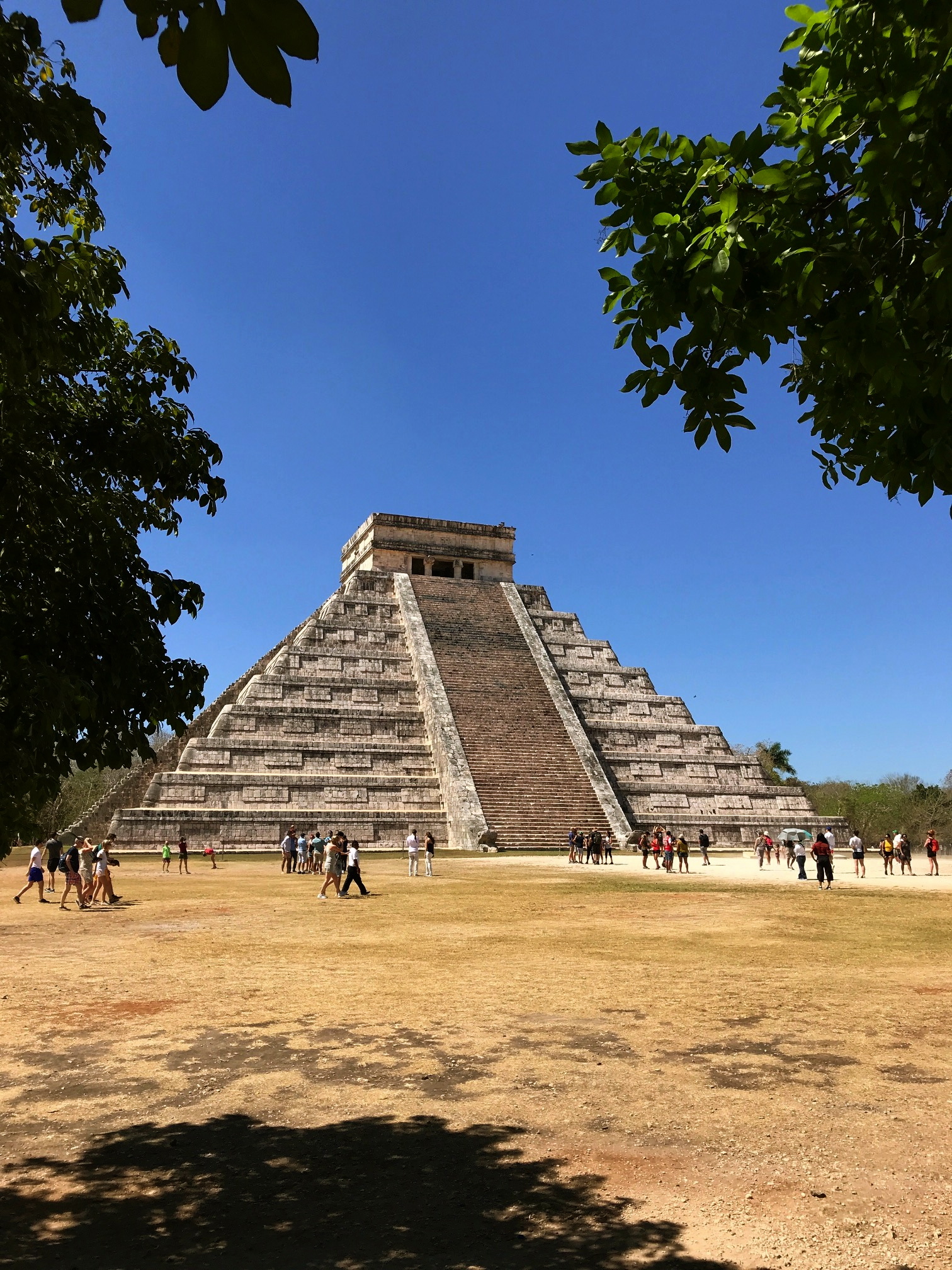 The Mayans, and the Toltecs who conquered them, believed that the gods were hungry for blood, in particular the blood of fresh human hearts. When the divine appetite for blood was sated, the sun would rise and the crops would thrive.

Legend has it that the gods preferred the hearts of young warriors. That only the hearts of the strongest, healthiest, most beautiful young people would please the gods’ delicate palates.

Hundreds of years from now, will tourists visit the ruins of American schools and shake their heads in horror? Will they ask why we, a once-advanced civilization, were willing to sacrifice our young because we believed—what, exactly? That it was a sacred right to own the deadliest of weapons?

At least the Mayans and the Toltecs thought they were making the sun rise. 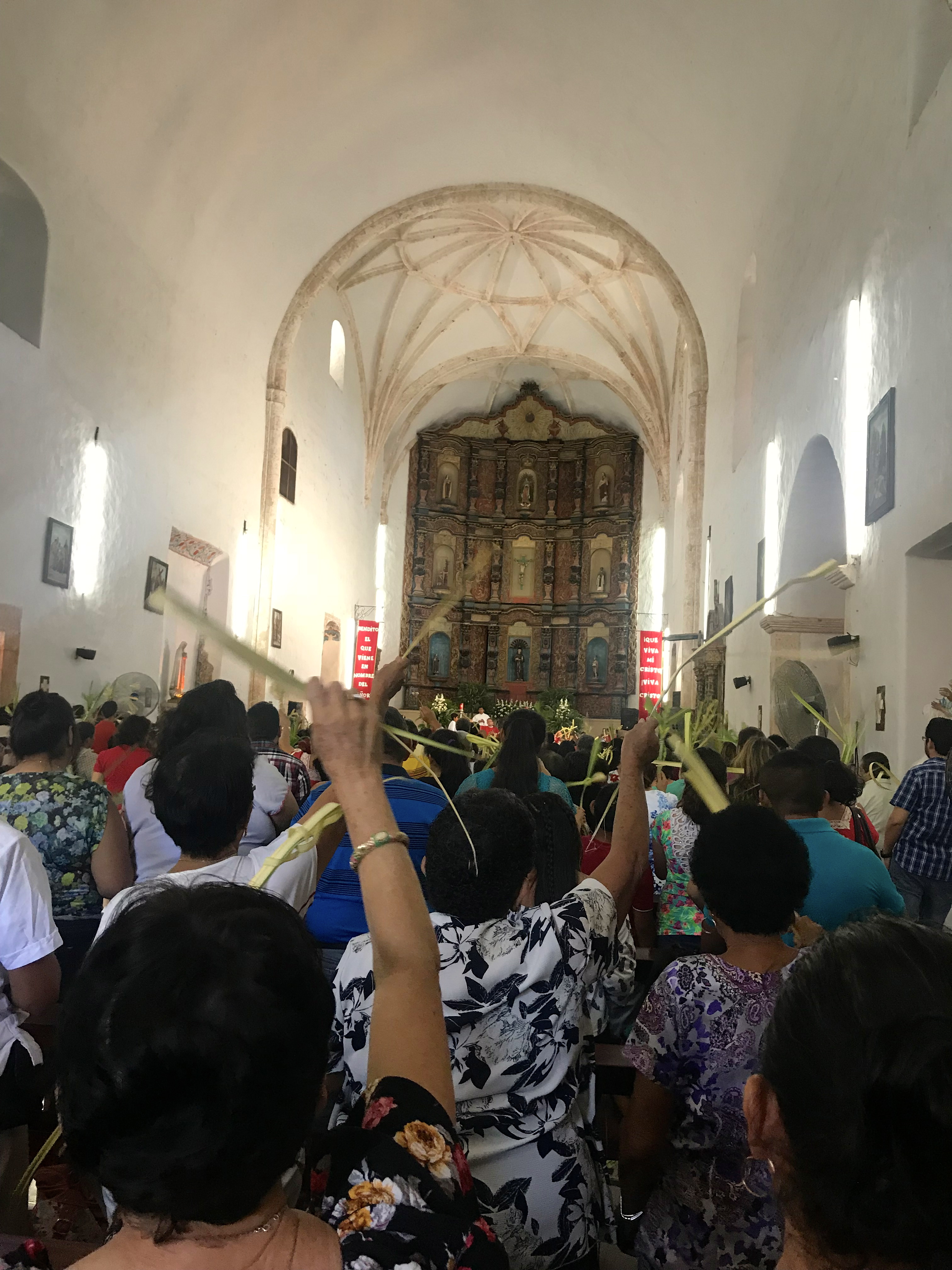 As I write, Passover has begun and Easter is tomorrow. I’m back in Seattle now, but I started this holy week in Valladolid, Mexico, a quiet, colonial city near Chichén Itzá. On Palm Sunday, I attend 9 o’clock mass at the Templo de San Bernardino, the 460-year-old Catholic church a few yards from our hotel. On my way in, I bought a 5-peso (about 25 cents) palm cross with a postage-stamp-sized picture of Jesus and a tiny blue flower stapled to it.

By 9 o’clock, the church was standing room only, with people spilling out the door. I was lucky: I got a plastic chair in a row set up behind the last pew.

A few minutes past nine, the priest greeted us and invited us to turn and watch as dozens of children, most of them wearing red, processed in, waving palm branches and singing. They all sat up front and took the lead whenever it was time for more music.

My Spanish is not great, but I gamely followed along, waving my palm cross when everyone else did, and returning my neighbors’ hand clasps and wishes for “la paz” when it was time to do that.

I have to be honest and admit that I was far more preoccupied with the beauty of what was right in front of me—people in their Sunday best, waving palms, reciting familiar words, listening to familiar stories, watching out for toddlers underfoot—than I was with the religious meaning of it all. I also felt the weight of what I saw as my essential duty, in that one hour, which was to show respect. To blend in, as best someone who looks like me could under the circumstances. To be observant in close proximity to several hundred people for whom being observant was second nature.

I was grateful for their tolerance.

On Monday night, our last night in Mexico, Rustin and I were walking down our favorite street, the historic route that connects our neighborhood to the central plaza. We were thinking about where the nearest bank machine was, and where we should eat dinner.

We could hear a crowd, with a loudspeaker. They sounded far away. Then suddenly they weren’t. They were coming towards us, right down our street. 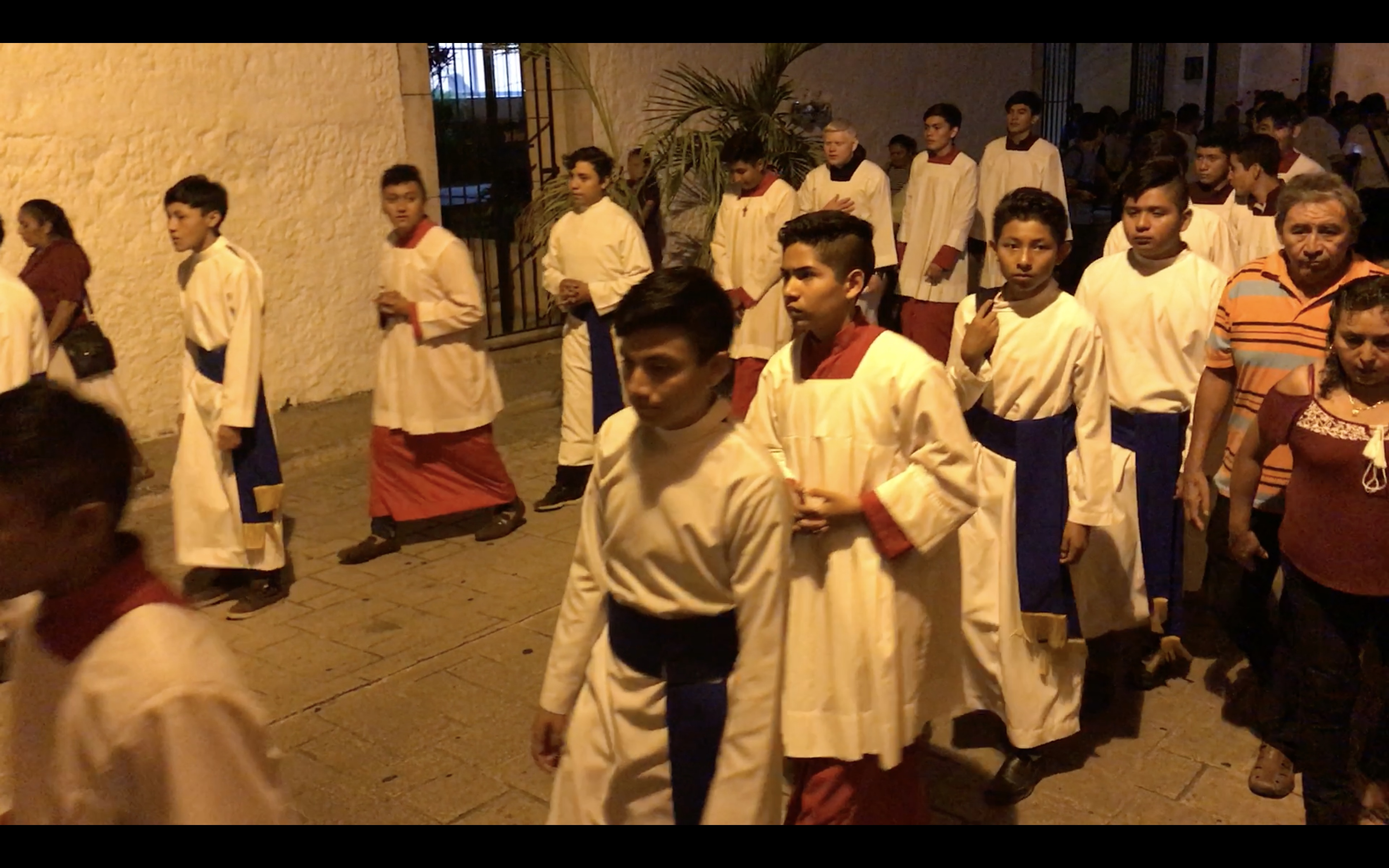 Leading the way were several boys in white robes, one of them carrying a cross. Behind him came the priest, in red. Behind the priest was an old car with a loudspeaker on top. Inside was a white-robed nun, singing into a microphone. After the nun’s car came crowds of people, ten abreast, singing with her, call-and-response style. We had to flatten ourselves against the nearest building to get out of their way. 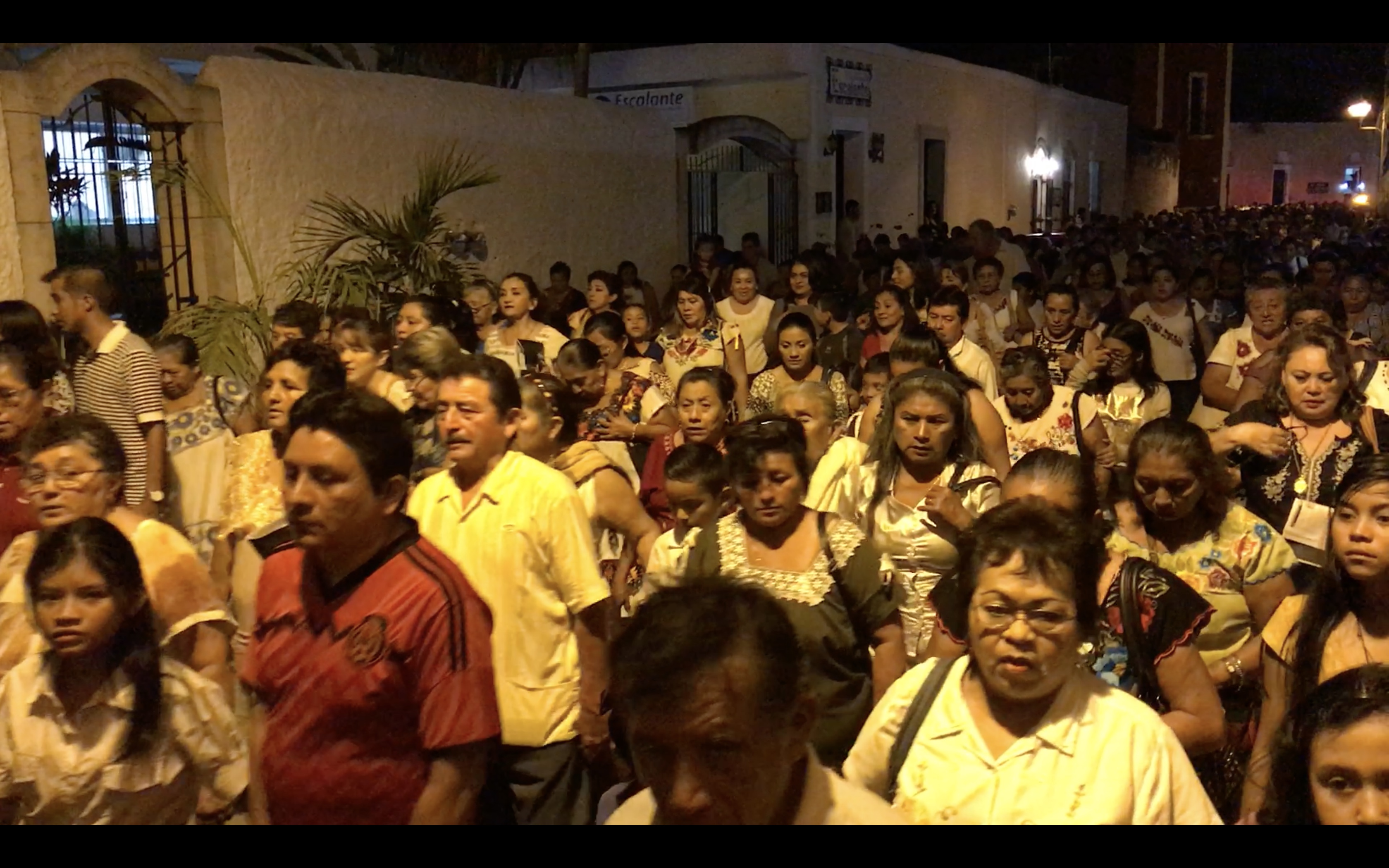 And they just kept coming. It was as if all of Valladolid, a city of 50,000, was taking part in this Holy Week Monday march, which we now understood had to do with the stations of the cross, which we could see placed at intervals down the length of the street.

The marchers were solemn, but not gloomy. There was a spring in their step, as if to say: This week is so important to us. This week is about sacrifice and it is about new life. It is about the divine in the human and the human in the divine. It is about grief and love and how they are forever intertwined. Some of us are devout, some of us are not, but on this night we come together. On this night we celebrate the triumph of love over violence.

Another year, I might tell this story differently. But this year, after seeing all the photos and video clips of the March for Our Lives; after being moved, again and again, by the power of the speeches and the silences; after visiting Chichén Itzá, with its bloodthirsty history—this year, this is what it felt like to witness Valladolid’s Holy Monday march.

Seattle readers: There are still a few spaces left in my upcoming Introduction to Memoir Writing class at Seattle Central. More information here.