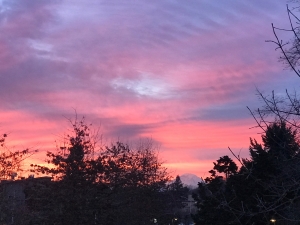 Two days shy of the darkest day of the year, silhouetted against a rainy twilight sky, I watched a young woman emerge from a tent, tugging a stroller behind her. A young man followed. They turned the stroller around and bumped it down a muddy knoll, lifting it over a ditch and onto the sidewalk. Their tent, pitched next to Interstate 5 at the 50th Street exit in Seattle’s University District, flapped behind them, sagging under the relentless rain, leaning half-heartedly against the wind, ready to cave in to the next good gust. As we waited for the light to change, all I could see of the baby in the stroller, across the two lanes of traffic that stood between us, was that at least she or he was covered with a blanket.

My husband and I were on our way to see the latest movie version of Macbeth. The very first shot in the movie is of a dead baby. And the weather in medieval Scotland, as seen on screen, was only slightly worse than the weather outside the theater in mid-winter Seattle. I shivered at the thought of living in such brutal conditions: no heat, no light, mud everywhere. But that is exactly how the young couple I’d seen coming out of their tent were living. Right here in my own high-tech hometown. Right now, in 2015.

As we drove home, we took in the sparkling lights of all the construction cranes in South Lake Union and downtown. It’s as if they’re competing this year for the most festive displays: long strings of brightly colored lights, even trees and Santas perched high above the city. And why not celebrate the ongoing construction boom? Five years ago, Seattle was dotted with half-dug holes, half-built buildings, half-done projects halted by the recession.

But the young couple with the stroller haunts me. How do two young people come to be so desperate that they pitch a tent on the edge of the freeway? And they’re not alone. The tents are everywhere. It seems that for every new crane hanging over another new construction site, there are dozens more tents popping up a few blocks away, often in places we haven’t seen them before.

It’s not my imagination. The Seattle Times reports that as of late November, 527 unauthorized homeless encampments were shut down by the city this year. 527. Those are just the ones that were actually shut down. That’s up from 351 in 2014. 131 in 2013. Eighty in 2012. On November 2, Seattle Mayor Ed Murray declared a homeless emergency and authorized five million dollars to be spent on shelter and services for people found sleeping outside.

Meanwhile, according to the Puget Sound Business Journal, nearly 21,600 rental units are currently under construction. But the Journal is also reporting an “alarming deterioration” in the local apartment rental market. Deterioriation! What could this mean? Here’s what it means: rents have dropped an average of $59 a month in the last quarter, in all neighborhoods except South Lake Union. Twenty percent of landlords are even offering “incentives” such as a month’s free rent. The vacancy rate is up from 4 percent to, wait for it, 4.3 percent.

Is this really how we define “alarming?” The fact that rents have taken a baby step backwards, towards actual affordability, is “alarming?” And you can bet rents are still so far from the reach of the people in the tents that they may as well be millions, not thousands, of dollars per month.

I don’t know what to do about the young family I saw coming out of the tent. Should I have pulled over, that evening, and given them whatever crumpled bills were in my purse? How much longer can I rationalize that doing the same small things, over and over again—volunteering when my church hosts homeless women and children overnight, buying diapers and toys for the families we sponsor at Christmas, giving coats and sleeping bags to the neighborhood kids who are collecting for their school, handing energy bars to panhandlers—is enough? And yet we, I, can’t not do these things. How could we not?

Mayor Murray is promising that the city will find shelter for the tent people. But is it? Are we? What’s going on in Seattle? Where and how are we going to find room at the inn?

Back to Macbeth for a moment. In this latest interpretation of Shakespeare’s 400-year-old play, director Justin Kurzel and actor Michael Fassbender as Macbeth are unflinching in their portrayal of a warrior who could have been a true hero and leader, if only he had found the strength to resist the temptations of power and greed. And we know where those temptations got him: to one of the most cynical, sad moments in literature, when he pronounced life “a tale told by an idiot, full of sound and fury, signifying nothing.”

But life is not that. If it were, the couple in the tent would just give up. Instead, they went out in the rain, presumably in search of food and help for themselves and their infant. Because, as theologian Henri Nouwen wrote, “we are called to be people of hope.”

But Nouwen also said this: “we cannot go around despair to hope. We have to go right through despair.”

There are mangers everywhere, in this Advent season.