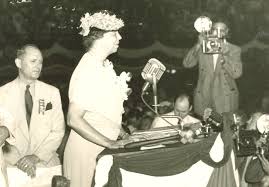 “This is no ordinary time,” Eleanor Roosevelt told the Democratic Convention of 1940, “and no time for weighing anything except what we can best do for the country as a whole.” No Ordinary Time: Doris Kearns Goodwin chose that phrase to be the title of her 1994 book, subtitled Franklin and Eleanor Roosevelt: The Home Front in World War II.

Eleanor’s words have a different ring in 2017, don’t they? This is a year that feels like no ordinary time in ways that she would likely find—dismaying. Discouraging. Despicable. Or maybe not: because Eleanor knew, almost better than anyone in her day, that every step forward toward justice for all was inevitably followed by an ugly backlash. She and her husband regularly received vicious hate-mail from segregationists, sexists, and xenophobes of all kinds. 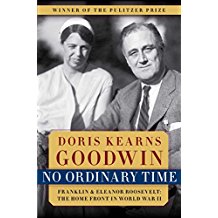 For two months, No Ordinary Time sat on my coffee table, all 636 pages of it (759, counting the end-notes and index). My father had dropped it off. He was sure I would find it as compelling as he had. I resisted. It looked so—daunting. But it only took a page or two for Goodwin’s writing to hook me and hold me.

This is a book that is both a detail-rich history lesson and a gripping summer page-turner. Reading it, I realized just how little I know about the history of World War II and about the president and first lady who steered us through those years of drama and tragedy. It is not a hagiography: Goodwin calls out, in particular, the tragic decisions to turn away Jewish refugees, the internment of Japanese-Americans and the military’s slowness to de-segregate. But reading it now, in our own un-ordinary, unsettling times, is startling in a different way. To be immersed in one of Eleanor’s epic trips—to munitions factories around the country, or to the South Pacific to visit troops—and then to see a news alert about our current president tweet-trashing transgender soldiers is to feel the hard thud of a crash-landing return to our current reality.

It’s as if those haters that used to write to Eleanor have taken over the country. And yes, of course she would be dismayed, if she were with us today, by their harsh incivility. By Anthony Scaramucci pretending to be a “communications director.” By a president whose pastimes include publicly taunting and badmouthing his own staff.

But I believe Eleanor Roosevelt would also be so proud of all the people who stood up to their senators this summer and told them: we don’t want your fake health care bill. We’re smarter than you think we are.

Our own un-ordinary times may not be so noble; the stakes may not seem so high. But I think Eleanor and FDR would argue that the stakes are always high, and there is always so much to do, and we must not let the backlashers have the last word.