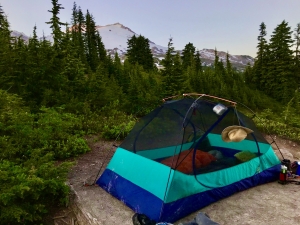 In the middle of this pandemic summer, in a tent on a ridge just a stone’s throw from Mt. Baker, my husband and I woke in the wee hours to the sound of two young voices, chatting away, getting closer and louder every second. We could see their headlamps bobbing like a pair of fireflies as they hiked towards us, up the steep trail known as the Railroad Grade route to the Mt. Baker climbers’ basecamp. Our tent was just a few feet off the trail. We’d left the rainfly off: on this silky July night, we needed nothing between us and the starry sky but the tent’s inner mosquito-net shell.

We hadn’t seen anyone else for hours. But here they came at 1:40 a.m., these two young men, hiking with headlamps, ready to climb Mt. Baker. They must’ve left the trailhead around midnight.

They were nearly on top of us when they finally saw our tent and lowered their voices a little. We pretended to be asleep. They walked on by. We watched their lights bob out of sight. 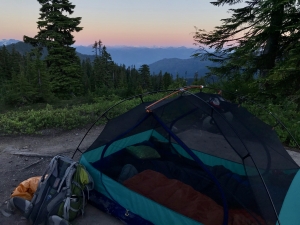 It took us both a while to get back to sleep. But there had been something so happy and cozy about their camaraderie, in the wee hours, that I felt lucky to have heard it. I don’t remember a word they said, only that they were animated and buoyant, as if their packs full of climbing gear weighed nothing. As if they were waterskiing uphill.

It was like hearing voices from the past: from that innocent Before time.

While we lay awake, our thirsty city eyes drank in the Milky Way. And that felt lucky too: first our ears, and now our eyes, were time-traveling to Before. To that place where the future used to be as big as the sky. Maybe that’s why those climbers were so exuberant: because they were traveling there too. 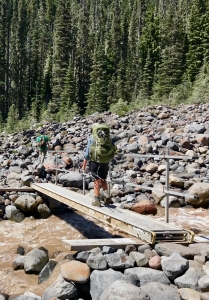 Earlier, hiking in the heat of that unusually hot afternoon, my backpack had felt like it was loaded with rocks. My legs were heavier with every step up the slope. I was fine once we got our packs off and splashed in the ice-cold creek. 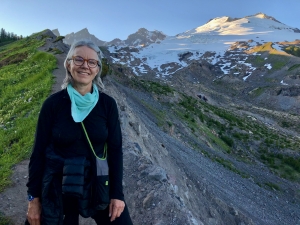 But that night, as I listened to the youngsters heading up to the mountain in the dark, I thought of how hard I’d struggled to make it only this far, and I marveled at their happy bouncing headlamps all the more.

They’re the future, I thought. Climbing right into and right through the dark. Soon, they’d reach snow. Maybe they’d be able to turn off their lamps and see by the stars and the half moon. I’m not a climber, so I can’t tell you whether that’s something that would be safe to do. Maybe not, if you’re scaling the glacial face of a 10,781-foot active volcano.

So often it has felt like we are climbing with heavy packs and no headlamps: feeling our way, stumbling and groping, trying to stay safe without a map, let alone any guidance. We yearn for the days when our legs were young and our flashlights fully charged and we knew the way.

Joe Biden was right to call this a “season of darkness in America.” And I badly want to believe what he said in his convention speech: that he will be “an ally of the light, not the darkness.” He’s probably three times as old as those climbers who loped passed our tent in the night, but he’s made it through unbelievably dark times of his own. I trust him to guide us up the mountain ahead. And he picked a running mate who has that same kind of grit.

At the end of her speech, Kamala Harris talked about how years from now, our grandchildren will ask us: where you when the stakes were so high? What was it like? 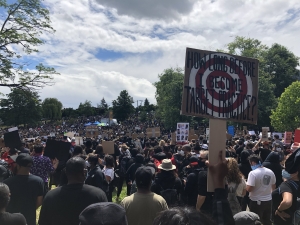 What we did. We will keep on marching peacefully. We will write, and call, and put up signs.

But what I did in the summer of 2020 was also go to the mountains as often as I could. Because I wanted to stay strong.

I wanted to rest my mind and work my legs and lungs, so that I’d be ready for who knows what might lie ahead this fall and winter.

And I wanted to be where even on a dark night, there is light everywhere. 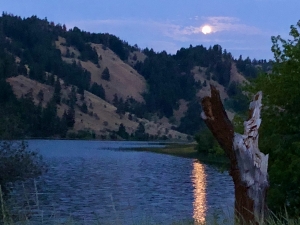 There are the stars, and the moon, and the snow. There are overheard voices that sound like the future. Headlamps bobbing like the first signs of hope.

(Full moon photo from another 2020 backpacking adventure in the Pasayten wilderness.)