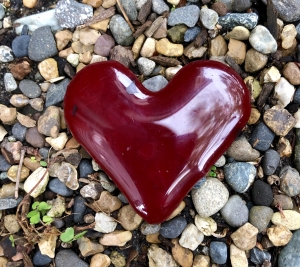 The taste of blood mixed with gravel is metallic, it’s gritty, but most of all, it is surprising. I hadn’t opened my mouth on purpose; the taste was just suddenly there. Remembering, I can taste it now. Just as I can hear the big kids yelling: “Go get her mom! She’s bleeding!”

I remember lying in the gravel, squinting in the bright sun. And, before she dropped me, how it felt to be carried by the neighbor girl: sweaty and awkward, our limbs criss-crossing in the wrong places; but so worth it, because I felt important. I felt like a princess.

When she let go of me in the middle of the street, it was like being dropped into a swimming pool—there was that one whooshing instant in the air—except that where I landed, chin-first, was not in water but in gravel. And what I tasted was not chlorine, but my own blood.

Sitting here on a pandemic afternoon, this is the scene from my early childhood I find myself trying to recall.

I don’t remember much more. I was only about three years old. We lived just north of Seattle, on a no-sidewalk block of modest ranch homes. My big sister had lost interest in carrying me, because we now had a new baby sister, but the neighbor girl was willing to give it a try. In this way, she explained, we could cross from my house to her house without breaking my mother’s rule that I must never walk across the street without asking permission. I don’t know what our goal was. It might’ve been store-bought popsicles in her mom’s freezer. Ours were homemade, and hard to get out of the plastic trays without adult help.

And I don’t have any memory of being rushed to the doctor’s office by my mom and getting stitches, though that happened. Six decades later, I can hold a mirror under my chin and still see the scar.

I can’t tell you why this tiny snapshot of a memory popped into my mind the other night, as I talked to my students on Zoom about how the basic building blocks of memoir are: 1) scenes from your life, and 2) your reflections on those scenes. That time the neighbor girl tried to carry me across our street, which was then a gravel road, and dropped me on my chin? That was a scene, I explained. What it meant to me then and/or means to me now? That would be reflection.

And so I am trying to reflect.

What it meant to me then was a bit of temporary child stardom on our street. And a sense that, wonder of wonders, my life mattered to other people: look how upsetting it was to my mother and big sister, despite the new baby, that I had been dropped in the road and was bleeding! Maybe I even learned a lesson about letting skinny neighbor girls pick me up and try to carry me.

What it means to me now: where to start? The only place I can start.

We are stuck inside a pandemic that feels like a giant-sized, global version of being dropped in the road, the version in which we have been carried along for so long by our own hubris, our myth of exceptionality, and now we have been smashed hard, by a virus we can’t even see without a microscope, onto an unpaved road we don’t recognize, one that tastes of blood and gravel and from which we cannot seem to get up, at least not very quickly. There’s no savior/scientist rushing out of the lab to speed us to a vaccine or an effective treatment; no genius/doctor whose magic sutures will stitch this pandemic right up; no tray of popsicles back home in the freezer, ready to take away the taste. Just blood and gravel and stunned shock.

And while we’re trying to stand up and figure out how to get ourselves safely across Pandemic Road on our own two feet and not in the arms of our lethal complacency, it’s not like all the other heartbreaks in the world are suddenly taking a holiday.

On April 6, 2020, a much more brutal and sudden hard landing rocked my family. It was my nephew David who fell. For more than ten years, opioids—first oxycontin, then heroin—had raged through his life, demanding more and more, until finally there was nothing left to extort but his last breath. And so David’s life ended, 15 days before his 30th birthday, in the unforgiving, unyielding, head-first dive that is death by opioid overdose. He is yet another casualty of an epidemic that, in 2018, killed 47,590 people in the United States. Overdoses from all opioids, including heroin and its especially deadly synthetic cousin fentanyl, continue to kill an estimated 130 people in America every day.

That David is abruptly, suddenly gone from this world in the middle of the Covid19 pandemic is surreal and head-spinning. One of the greatest cruelties of it is that we can’t gather as a family. To say goodbye, together, to the hope that he and we kept rekindling, over the years, again and again and again. Instead, we are suddenly vulnerable and fragile: not in the kind of terrifying way that David had been for the last decade, but in this strange new way that forces us into isolation and fear. 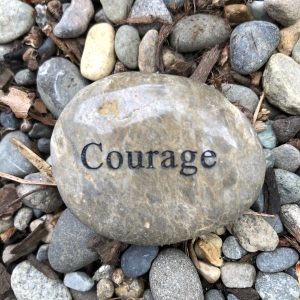 That’s what those of us who loved David are learning. And the best balm—sobbing on each other’s shoulders—is currently forbidden, except with the few people we live with and are allowed to touch. So I call family members while I walk in the April sun and rain, and we grieve together via telephone. Or I visit my brother-in-law, my niece and my sister, who is David’s mother and was once upon a time the new baby sister in that earlier story. And we hug, awkwardly, illicitly, turning our faces to the side, and then we take a few steps back and try to keep the feeling of the hug going. And we talk. As if we’re trying to make sense of David’s death, though we know we can’t. Just like we can’t make sense of the pandemic: the mistakes and the whys and the as-yet-unrealized solutions.

Yet it is so very human to keep trying. To try to make sense.

Hence, metaphors about little girls being dropped in the road.

The late-day rain is calling to me. It’s time for another walk.