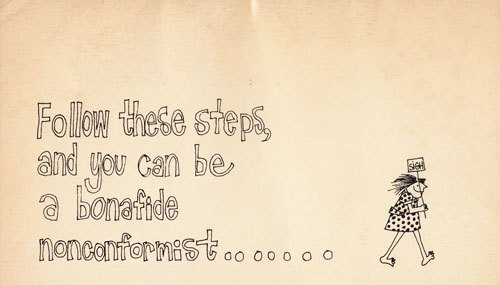 When I was in sixth grade, I fell in love with a book called How to Be a Nonconformist. I loved it because it was a playfully written and illustrated cartoon diatribe against the social pressure of the era to be cool, hippy-style, which to my ten-year-old eyes, was a rigidly conformist way of life. I grew up a mile from Seattle’s University District. Long hair, fringe vests, beads and sandals made me roll my eyes, precisely because the people who dressed that way pretended so obnoxiously to be nonconformist when, clearly, I harrumphed, they were anything but. 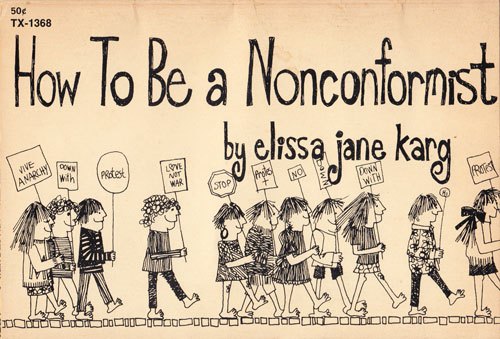 How to Be a Nonconformist is out of print, but you can see some of it on the gorgeous Brain Pickings blog. You can also read about the author, Elissa Jane Karg Chacker (1951-2008), who was just 16 when she wrote the book and went on to become a nurse and lifelong socialist, in this tribute on the Solidarity website.

I am sorry Chacker did not live long enough to see what her age-mates are up to now. Because I think many of them are finally figuring out how to be real nonconformists, and to those of us who are a few years younger and in need of role models, it is a bracing trend.

Reinvention is what I’m talking about. We all know that the days of working one job all your life and then retiring to a La-Z-Boy recliner are over. Sure, some people still do that, but so many of them find they can’t sit still. For starters, there are the economic realities: We’re living longer, which means we need to work longer, so we can sock away more money for old old age. Or so we can pay for all those things our health insurance for some reason doesn’t fully cover. Or so we can pay soaring rents or higher property taxes or $13 to go to a movie. But I digress.

The reinvention I’m talking about is not about money, it’s about meaning.

What’s interesting to me, as I think back on How to be a Nonconformist, is that so often, people’s stories of finding meaning have to do with going back to some version of what they loved most as a pre-cool ten-year-old.

I have one friend who was a lawyer and is now a poet. I have a sister-in-law who decided to live in and restore her truly unique childhood home rather than sell it after her mother’s death. I have a friend who retired from corporate communications but went back to work for a nonprofit she’s supported all her life because she believes in their mission of helping homeless families. I have other friends who are doing things they’ve never done before: writing their first book or joining a choir or training in hypnotherapy or hiking the Camino de Santiago as a true pilgrim and not just for the exercise.

At ten, what I loved was writing in my own, real voice: not school papers, not the journalism, press releases and documentary scripts that eventually defined my professional life, but stories by and/or about the real me. So that’s what I’m doing now: not exclusively, because it never will pay the bills, but that’s OK. It’s important to me. It’s what makes me me. And on this side of the old bell curve of life, I get that I should do what matters to me not later but now.

Now, at 59, I look back on my teens, twenties, thirties and forties and think: what a time this decade has been in my life. What a time of learning to think and feel on the page. What an opportunity to accept all the contradictory parts of myself and allow them to get to know each other. It is especially meaningful to see creative me and spiritual/seeking/questioning me talking to each other. Playfully, some of the time, and quite solemnly and seriously at other times. I am grateful for this trend. I think the level of suppression, of NOT allowing such dialogues, that I practiced earlier in my life often exhausted me.

Just like being perfectly sandaled, long-haired nonconformists must have sometimes exhausted the people Chacker parodied in her book. Now, all these decades later, what a relief it is that we are all allowing ourselves to be works-in-progress. To be our own ongoing experiments in reinvention. 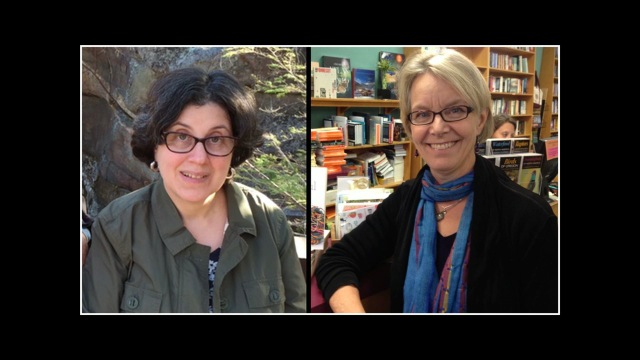 New Yorkers: I’ll be reading at Cornelia Street Cafe with poet Dana Robbins on May 4 at 6pm. Our event is titled “Word Medicine.”  Hope to see you there!