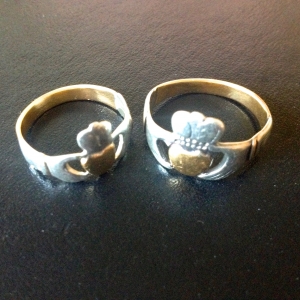 I’m wearing two wedding rings right now: mine and my husband’s. He takes his off before he plays basketball, and he left it in the car. Our son spotted it in the cup holder and I put it on. His ring is bigger than mine. It feels heavy around my forefinger. I’m aware of it as I type. He’s not home yet, so I’m still wearing it.

These two rings I’m wearing started life as four: two cheap gold bands and two silver Claddagh rings, the traditional Irish ring in which two hands hold a crowned heart. The gold bands we bought one warm summer day on our lunch hour at a discount jeweler. We were saving money for an extended honeymoon, a round-the-world backpacking trip, so we didn’t want anything expensive.

A month later, our trip was underway, but we were spending one week apart before our Scotland wedding. Rustin was with his dad in Germany and I was in Ireland with my friend Kathy, who convinced me to buy the Claddagh rings as my wedding gift to Rus.

“The crown over the heart means ‘Let love reign,’” the Irish jeweler explained.

What could be a more perfect message?

But life can be hard on rings. About a decade or so into our married life, Rus’ gold band snapped in half. And then his silver Claddagh ring broke too. Not the most welcome developments, symbolically speaking, especially since we’d been through some class-four rapids on the old marital river and were trying to just quietly row for a while in calmer waters.

One day, I was driving past the Pratt Art Institute on Jackson Street, which is known for its jewelry and metallurgy studio, and I thought, “Of course! We’ll get a jewelry maker to fuse our rings!”

And so we did. Seattle jewelry designer Shava Lawson fused the gold bands with the silver hands, hearts and crowns, adding a dab of gold to the hearts. We’ve been wearing them ever since.

That would be 26 years and four months of wearing these symbols on our fingers with their simple message: Let Love Reign. If we were single, Irish tradition would have us turn them upside to show our availability to the next prince or princess of love that might come along. But we’re not, and sometimes it stuns me with gratitude to think for how very long we have been loyal subjects of not just love in general but this one love, our love, in particular.

It stuns me and it scares me, too. My friend Kathy’s own love story ended when she died in 2012 of cancer.

I thought of Kathy a few weeks ago when I was watching Downton Abbey. Stay with me here, even if you’re not a fan. There was a scene featuring the three bereaved characters—Tom, whose young wife Sybil died in childbirth; Mary, whose husband survived the trenches of World War One only to die in a car crash; and Mary’s mother-in-law, Isobel, who reminisced for a few uncharacteristically indulgent minutes about how she fell in love with her long-dead husband. Then Isobel said to the others, “We’re the lucky ones, aren’t we?” The lucky ones: lucky to have known love, even though all three of them were parted from love by death.

As I twist these two rings of ours, both of them strong now, thanks to Shava’s careful welding—I really can’t add to that wisdom, that grace. To know love, to let love reign for a time, long or short, over your life, is indeed to be lucky.

Love often gets a pretty bad rap this time of year. It’s easy to go dark and cynical and to grumble about the commercial bonanza that is Valentine’s Day. But for those of us who feel that humble, stunned gratitude, I say: Let love reign.

Calendar notes: I’ll be speaking and screening Quick Brown Fox: an Alzheimer’s Story at SUNY Oswego on February 18; I’ll be reading from Her Beautiful Brain as part of a program called Witnessing Dementia at Seattle’s Frye Art Museum at 6:30 pm on February 27 and, in celebration of the publication of an anthology called Into the Storm: Journeys with Alzheimer’s (edited by Collin Tong), I’ll be reading along with some of the other authors at Elliott Bay Bookstore at 3pm on March 16.