State of the Union: Flashback 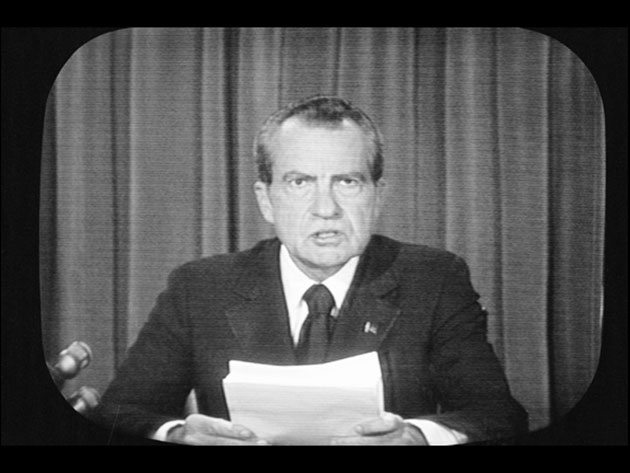 I had a flashback during the approximately 30 minutes I could bear to watch of the State of the Union address.

In the summer of 1974, which for me was the summer between high school and college, I was working the front counter at Kazdal’s Deli on University Way in Seattle. Kazdal’s (which later became the Lock, Stock and Bagel) was more of a lunch spot than a dinner restaurant. So just before 6 p.m. on August 9, the place was pretty quiet.

Suddenly, someone burst in our door and asked if we had a TV. “Nixon’s about to resign!” he said.

No, we didn’t have a TV. “But the Continental does,” said the cook, who had come running in from the kitchen. “Let’s get over there.”

The Continental was the Greek restaurant across the street. The cook dashed on over. I looked around—not a customer in the place—grabbed the keys, locked the front door and followed him.

I was about halfway across when a cop on a motorcycle roared up to me.

“Get back on the sidewalk, Miss. I’m writing you a ticket for jaywalking.”

“But Officer, don’t you know? Nixon’s resigning right now and I have to get to the Continental to see it on TV!”

The policeman was unmoved. He took down my name and address and gave me my ticket, watching me as I ran up to the crosswalk, waited for the light to change, and ran into the Continental, just in time to catch Nixon weirdly yammering on to the American public. He was actually trying to talk about his accomplishments. It seemed, to my 17-year-old ears and eyes, like a badly acted play about a sad, half-crazy man who thought he was the president, which is of course why it came to mind during Trump’s State of the Union speech.

But Nixon’s tone-deaf farewell also felt like the beginning of the end of a bitter, cynical, cacophonous era. And that’s why everyone at the Continental clapped and cheered. 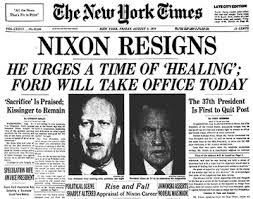 And then, just like that, Gerald Ford was our president, for two and a half years, which meant that those of us who entered college at that exact moment in history got a pass from the daily outrage that had been the lot of our older brothers and sisters. I am not proud of our mid-70s apathy, but I do get it. We were politically worn out by the time we could drive.

In a way, I’m thankful for Gerald Ford. I can see how he played a part in the emotional repair of our exhausted country. Yes, we were appalled when he pardoned Nixon. Later, it became easier to understand why he did it. In 2001, the John F. Kennedy Library Foundation even gave him a Profile in Courage award for doing it. 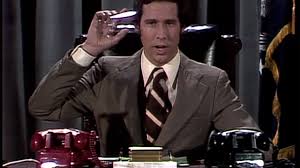 And there were those priceless Chevy Chase impressions on Saturday Night Live: also part of our national healing process.

If Trump ever resigns or is impeached, it is hard to imagine Vice President Pence rising to the role of Calming Presence in Chief the way Ford did. I prefer to imagine a dreamworld scenario in which Pence is also ousted, and the post-midterm-elections, future democratic Speaker of the House becomes president.

But on January 30, 2018, it was that lack of connection to the real United States of America in which we all live—as opposed to Trump’s fantasy United States of MAGA—that reminded me, along with Trump’s faux-patriotic delivery and love of stagecraft, of Nixon, nearly 44 years ago, in his final hours as president.

There was certainly stagecraft aplenty in Congressman Joe Kennedy III’s response, filmed in front of a car with its hood up at a technical school in Fall River, Massachusetts. But after Trump, I was more than ready for Kennedy’s honest anger and rousing shout-out to what really makes America great: as he put it, “our highest American ideal: the belief that we are all worthy, we are all equal and we all count. In the eyes of our law and our leaders, our God and our government. That is the American promise.”

If you didn’t watch the State of the Union, don’t bother. Check out Joe Kennedy’s speech. Cheer yourself up with an old Chevy Chase skit. Or, if you’re feeling brave, dial on back to August 9, 1974, and see what Nixon had to say.