Nine years ago, a freelance critic for The Seattle Weekly suggested, in print for all to see, that I might be suffering from Stockholm Syndrome. She was right: I was. I tend to fall hard when I fall in love.

The critic was reviewing a short film my husband and I made called Art without Walls: the Making of the Olympic Sculpture Park, which aired that week on KCTS, our local public television station. Her point was that I was clearly way too enthralled by Seattle’s new sculpture park to produce an unbiased documentary about the making of it. Guilty as charged: I loved the sculpture park.

The term “Stockholm Syndrome” was coined in 1973, after several hostages in a Swedish bank holdup-turned-siege became emotionally attached to the robbers who had imprisoned them in a vault for six days. (I am one-eighth Swedish-American: could there be a genetic tendency at work?) In 1973, I was 16, and I read about such events with great interest, perhaps because I was still not fully recovered from my first and most dramatic bout of Stockholm Syndrome, which struck when I was 13.

Do you remember the brief fad for chocolate fountains? How beautiful the chocolate looked, pouring over and over, endlessly bountiful, into a surrounding pool. How agonizing those fountains must have been to anyone who was dieting, or diabetic.

When I was 13, I dove right into the chocolate fountain of evangelical Christianity. So sweet, so filling, so sublime. And at first, it felt so uncomplicated: just believe. Believe Jesus Christ is the one and only way to eternal life, and eternity is yours. Believe you can speak in tongues, and presto: you can! Believe men are superior to women. Believe premarital sex is wrong. Stop thinking. Simply believe.

But it turns out I couldn’t stop thinking. Thinking has always been my downfall. Thanks to 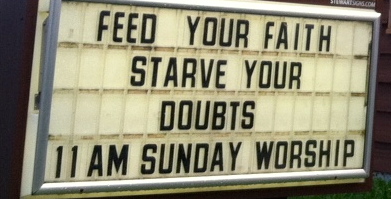 excessive thinking, I failed at flirting, tennis, knitting and my first fifty attempts at parallel parking. And I failed at being an evangelical Christian.

I swam in that silky, rich fountain through much of my teens, but the romance ended abruptly when I got to college. At the time, I remember feeling like I was both betrayer and betrayed; like I had turned away from Jesus with the secret hope that he would try to win me back, but instead he went off to court a new crop of acolytes. I felt like a rejected first wife: older, wiser (or so I thought), but not nearly as cute and fun as I once was.

Twenty years later, I returned, tentatively at first, to church: this time, to a welcoming, liberal kind of congregation where I sensed that a closet doubter like myself could safely blend in; that this could be a place where I could find spiritual sanctuary while I continued to ask the questions that never went away.

And now, unbelievably, another two whole decades have passed, and I’m still going to that same church. And the questions haven’t gone away. I never cured myself of too much thinking; if anything, I’ve gotten worse. But I have, finally, accepted my spiritual self for who I am: an observant doubter. A survivor of Stockholm Syndrome, who wants to live meaningfully.

I’m trying now to write more about all of this. I’m starting with the story of what came first: my fervent, young faith—how it happened, and why I think it happened, and how it fit into what was happening in the world at the time, and did we really speak in tongues and swallow the apocalyptic visions of The Late Great Planet Earth? I want to include stories of some of the people I’ve traveled with along the way. I want to connect with others for whom faith and doubt co-exist; I believe there are many of us who live along this spectrum, far from the noisy extremes of fundamentalist faith or unwavering atheism.

I don’t know yet where this is all leading, but giving myself the time to do it means posting less frequently on this blog. See you once a month or so. The nest is ever restless!