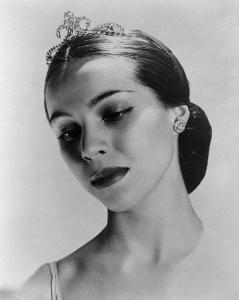 She “made us move bigger than we actually were, with a courage and physical confidence we didn’t yet possess,” wrote Jennifer Homans in a recent tribute to the great ballerina Maria Tallchief, who died in 2013. Maria Tallchief: what a graceful name for the daughter of an Osage chief who grew into a dancer known all over the world for her long-limbed, dazzling, powerful presence. My own memory of Maria Tallchief is not of her on stage—I was never so lucky—but of the sound of her name as spoken by my mom. She said it gratefully, joyfully and with wonder: as in, can you imagine how thrilling it was for me to see Maria Tallchief on stage in Butte, Montana? How lucky I felt?

I think she saw Tallchief in Swan Lake. It must have been the late 1940s, when my mother was in high school. Butte, her hometown, was in a pretty happy mood then: World War II had brought Butte’s copper mines—a vast honeycomb underneath what had been known before the Depression as the “richest hill on earth”—back to life. My grandparents bought their first house, a tiny bungalow down on the flats with a stamp of a yard where you could coax a little grass and a few trees to grow: paradise, after a dozen years in the treeless tenements uptown.

The Depression had been very hard on Butte, and on my mother’s family. And so this ballerina, whose talent was to be bold, strong, courageous, to exude confidence from her outstretched arms and atop her pointed toes; who wasn’t a hothouse flower of the east but a daughter of an Oklahoma tribe—no wonder she made my mom and all of Butte, Montana swoon.

We memoir writers like to imagine such scenes. It’s a way of understanding something about our parents’ past—which is our past, too. Because when you hear your mother or your father talk about the events that shaped their young lives, you absorb their truths. For my mom, the truth of Maria Tallchief was this: Seeing a beautiful dancer dance to beautiful music is a gift beyond description, a way of lifting your spirit beyond daily life to somewhere else, some other realm. This is what matters about art. This is what is worth remembering.

As a child, you take note of what memories make your mother’s eyes light up. You file it somewhere; you understand that if you should ever get a chance to see ballet, you will do so, and you’ll do it with reverence.

As an adult, you remember your mothers’ shining eyes as you stare at the New York Times Magazine’s stunning photo of Tallchief in a 1948 performance of George Balanchine’s Orpheus. You long to call your mom and hear the story again, but your mom is long gone, and so you go down the rabbit hole of the Internet and find nothing about Tallchief’s performance in the late 1940s in Butte, Montana. Did it happen? Are you remembering wrong? Perhaps your mom saw Tallchief in the late 1950s in Seattle, or on the Ed Sullivan show in the early 1960s.

But the truth remains, a truth that transcends remembered or forgotten facts. You grew up with a mother who treasured encounters with transcendent beauty, and so you too learned to treasure such encounters.

And this is why the Times’ “Lives they Lived” issue of the magazine, which comes out at the very end of every year, is such a rich reading experience. An ode to Maria Tallchief moved me to remember my mom and to write. For you, it might be the photo of James Gandolfini’s Cadillac. Or the tributes to Abigail Van Buren, Joyce Brothers, JJ Cale. Or you might find that the story of someone you’ve never heard of—87-year-old marathon runner Joy Johnson, for example—lifts you out of your everyday life for a few minutes, like a ballerina on a stage in Butte, Montana did for my mother, more than sixty years ago.