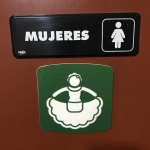 We welcomed in the 2020s in the Mexican port city of Veracruz, where even the restroom signs can’t stop dancing. Rustin and I arrived on December 28th, thinking it might be quiet for a few days before New Year’s festivities kicked into full swing. Quiet would have been fine with us: we’d been traveling for two weeks and we had a few things to get over, including illness (Rus’s flu) and theft (my phone.) But quiet, in Veracruz? De lo contrario. 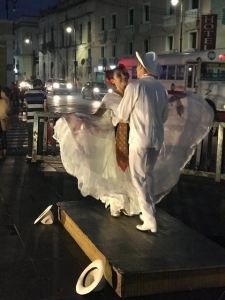 On our first short walk—from our hotel overlooking the historic heart of the city, the Zocalo, over to the lively waterfront—we passed two small troupes of folk dancers in flowing white who had set up their wooden platforms on two different street corners, turned on their boom boxes, and commenced to dance. I can’t think of them now without smiling, because they radiated such joy. 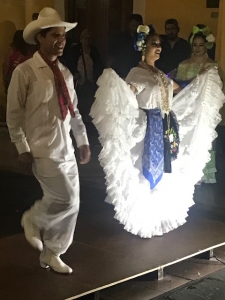 Crowds were also forming around a capoeira-style breakdancing group. By the time we circled back to the Zocalo, roving bands—mariachi, marimba, ranchero—were working the outdoor bars. Meanwhile, people were thronging in the direction of the main street. A parade was coming, someone told us.

We darted across the cordoned avenue to the Bar El Estribo, on the block-long veranda of the stately Gran Hotel Diligencias. Our waiter said the coming parade was called Papaqui and that it would be a sort of mini-Mardi Gras parade, a preview of Carnaval, which is huge in Veracruz. He explained that it was always held on this day, the Dia de los Inocentes, so called because it marks the day on which Herod ordered the slaughter of all the babies in Bethlehem under the age of two because he’d got wind that one of them might be the Messiah. (Meanwhile, Jesus and his parents had been warned and were already on the road to Egypt). 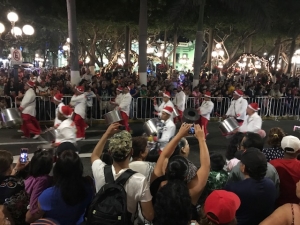 Somehow, over the centuries, this occasion of murder and anguish had become the day on which, in Veracruz, the thing to do is to put on a pull-out-the-stops parade.

Maybe this makes more sense if you think of the history of Veracruz, which is where Hernan Cortes began his bloody conquest of Mexico five hundred years ago. Because he stepped ashore on another day of death—Good Friday—Cortes named his first stop in this hemisphere “Villa Rica de la Vera Cruz:” the “rich city of the true cross.”

Over the centuries, Veracruz has been rich indeed, in gold, sugar, rum, petroleum and the business of shipping every single thing Mexico ships. Gradually, all those boats coming and going from the Caribbean, Europe, Africa and the Americas steeped the City of the True Cross in a heady blend of music. Son Veracruz is best known in North America for “La Bamba” and its many intricate variations, which you hear on the street as the dancers twirl and stamp on their wooden platforms, faster and faster. 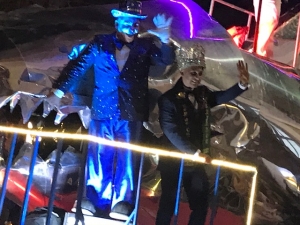 But back to the parade, the Papaqui. Its main beat was more marimba than Bamba, punctuated by drums and brass, dancers and musicians all gliding forward in unison. There were floats bearing women in glittery gowns and men in spangled topcoats, all of them waving, Miss-America-style: they were the 2020 Veracruz Carnaval royal court, being introduced for the first time. The patrons of El Estribo (translation: “the spur”) clapped and called out to them by name. They also urged the two of us up to the railing so we could get the best view, as wave after wave of musicians and dancers dressed in every kind of costume, from feather bikinis to stretchy business suits, sashayed past in lockstep formation.

So I won’t continue with the Veracruz blow-by-blow, except to say that every night there were surprises that were just as over-the-top as the parade. Sometimes it felt exhausting, just trying to figure it all out in our not-fluent Spanish. There were also more and more bands of children and young adults in “viejo” (cartoonish old person) masks roaming the streets, dancing and shaking cans for coins: the idea, apparently, is to bid the old year good riddance by tossing a few pesos in their cans.

2019 had its sweet moments, but really? It was a tough, cranky viejo of a year. Cantankerous from the get-go. It sure felt old, by the time we got to the ragged end. 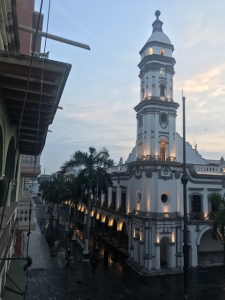 I loved writing “2020” for the first time, in my journal, as I sat on the balcony of our oddball, surely haunted, 225-year-old hotel, speaking of old, while the Cathedral bells and the Municipal Palace bells took turns chiming seven times. The morning before, the bells had actually chimed “La Bamba.” On January 1, 2020, we didn’t need such flourishes. It was enough to know the time of day: seven o’clock, on the first morning of a new decade.

We finished packing our bags and walked out onto the empty Zocalo to say goodbye to Veracruz, and to the biggest Viejo mask of all: the Old Year itself, who had danced the night before on giant puppet strings rigged from a truck. 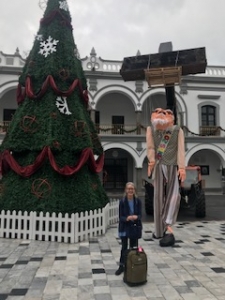 Here’s wishing una poca de gracia to all of us, as we try to catch the beat of this new decade. Or maybe let’s just take it a year at a time. 2020. So much could happen. We just need that little bit of grace. 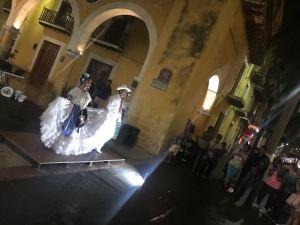