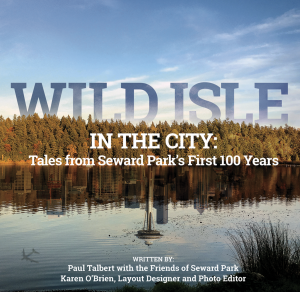 Wild Isle: what a beautiful pair of words.

But where, on earth, might there be a wild isle in a city?

Right in my back yard, as it turns out.

One hundred and just about nine years ago, the voters of Seattle gave themselves a gift they decided to call Seward Park: an island of wild old-growth forest that juts into Lake Washington from its southwest shore, barely connected to the mainland via a then-slim isthmus. It seemed only right to name this green jewel box after William Seward, best known for negotiating the 1867 purchase of Alaska, a territory that Seattleites were very fond of, back in 1911, because of the money that had poured into the city as gold prospectors from all over the world stopped to gear up before sailing from Seattle to the Klondike by way of Alaska. On their way home, the miners stopped through again, and spent more money. At last, Seattle could afford the wild isle at the southern end of the stunning chain of parks and boulevards laid out by the famed Olmsted brothers of New York.

And now our Wild Isle has its own beautiful book. 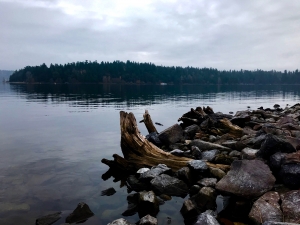 Published by the Friends of Seward Park under the painstaking direction of writer/editor Paul Talbert and photo editor/designer Karen O’Brien, Wild Isle in the City is full of “tales from Seward Park’s First 100 years,” as the subtitle promises. But it goes back much, much further, all the way back to the Ice Age geology that shaped our city; the abundance of trees, plants, fish, mammals and birds that call this place home; the first people who lived here, at least four thousands ago and probably long before that. There are photos and maps and dozens of stories. I contributed just a few: one I wrote in honor of the park’s 100th birthday in 2011, and the other a profile of Dorothy Block, a mid-20th-century Seattle activist who lobbied to clean up Lake Washington and preserve Seattle’s parks at a time when civic pride was far more focused on jet airplanes and tall buildings. Dorothy Block died in 1961 following surgery to remove a brain tumor. She was 35, the mother of six children, and president of the local Camp Fire Girls council. In her honor, the council built a campfire ring in Seward Park.

Wild Isle is full of names, like Dorothy Block’s, that deserve to be remembered. Edward Otto Schwagerl, for example, who was born in Bavaria, immigrated alone at age 12, and eventually became a landscape architect. By 1892, Schwagerl was Seattle’s second Parks Superintendent, and he wrote these words in a report: “Parks are full of Nature’s innocent and holy inspirations, and in them are whispers of peace and joy. Parks are the breathing lungs and beating hearts of great cities… where rich and poor mingle to inhale the unalloyed, God-given perfumes to body, mind and soul.”

The breathing lungs. The beating hearts. 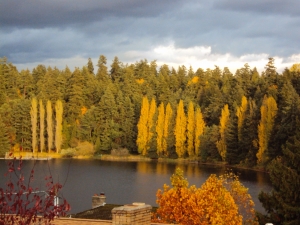 View of Seward Park from our home about a decade ago (the poplars are now gone).

When my husband and I bought our first home in 1990, just a block and a half up hill from the Seward Park swimming beach, we had no idea how the beating heart and breathing lungs of Seattle’s Wild Isle would shape our own bodies, minds and souls. It’s truly astonishing to think of how unaware we were of what a gift the park would be. Of how much we would treasure those old trees, the cool lake water, the eagles and herons and wild rhododendrons, as we navigated work and family life during the busiest years of our lives. After 21 years, we moved, but only a few miles. We still visit the park two or three times a week. Our children, now adults, are attached too—this was where they grew up—and they too get there as often as they can. 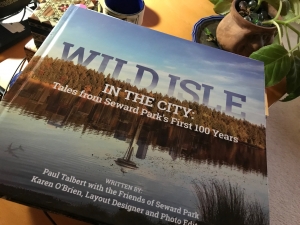 I love holding Wild Isle in the City in my hands. I love opening it to photos of a landscape I know so well. I love learning, after all this time, bits of park lore that I never knew. Maybe if you grow up in a place that’s been well-documented in lots of books—New York, for example—you have this kind of experience all the time. But for me, it’s new. And I’m not alone: as I wrote in Wild Isle, “Dorothy Block would have loved to see what Seward Park has become: not only an urban wilderness sanctuary on the shores of the lake she helped clean up, half a century ago, but the vital green heart of one of the nation’s most diverse zip codes.”

You can order your own copy from the Friends of Seward Park. Proceeds help support the Lakewood Seward Park Neighborhood Association scholarship fund and the Friends’ stewardship activities in Seward Park. And when you visit the park, make to sure to stop in at the Seward Park Audubon Center.