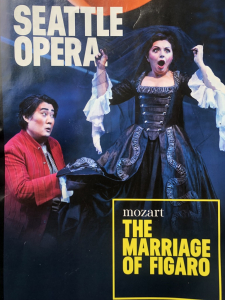 Who knew that one of the central themes of Mozart’s The Marriage of Figaro is droit du seigneur, the feudal “lord’s right” granting the lord of a medieval European manor “sexual relations with servant brides on their wedding night?” Since I am a kindergarten-level opera fan, I am grateful to Seattle Opera General Director Christina Scheppelmann for stating it so clearly in her program notes. Because who knew I’d be watching The Marriage of Figaro—the first performance I’ve seen in Seattle’s McCaw Hall since before the pandemic—just days after the leaking of Supreme Court Justice Samuel Alito’s medieval memo detailing his lordly belief in a woman’s lack of rights over her own body?

On the morning of Mother’s Day, I googled “senior rush tickets Seattle Opera.” Yes, the Opera’s rush ticket program was alive and well and yes, I now qualified! So off I went to McCaw Hall, where I bought my ticket at 12:30, which gave me plenty of time for a long walk. The sun was out at last, and the lovingly tended gardens of nearby Queen Anne Hill sparkled as they shook off the rain. By 2 p.m. I was back at McCaw, happily settled in my seat in Row P on the main floor, just off the aisle. Forty-five dollars felt like both a splurge—so self-indulgent!—and a bargain: only $45 for such a fabulous seat!

And what a delightful, self-indulgent bargain of a splurge it was. To hear and see, in person, in all the immersive, sensory beauty that the word “live” implies, an opera that I had only ever heard on the radio, was like the difference between ordering take-out and sitting down to a meal in a lovely restaurant. And to be able to follow the story was like someone a few tables over sending me a bottle of champagne: it truly had been so long since I’d been to the opera that I’d forgotten about the invention of supertitles. Which were key to following the whole droit de seigneur threat hanging over the plot. 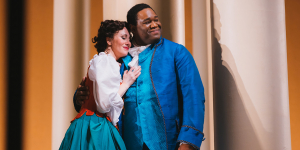 Protest takes many forms, and I did not know that Figaro, which premiered in 1786 (just a few years before aristocrats were marched to the guillotine in France) was, in its day, so subversive. Certainly Figaro’s fiancée Susanna, as I saw her played on May 8 by Anya Matanovic, was no demure and clueless lass. We knew she’d win this one, and it was pure pleasure to watch her do it.

But the joy of it all was also about how much I’ve missed such delights. More than I realized. Much more. After two cloistered years, it was electrifying to be in a vast, airy, stunning space, just me and a few thousand other rapt audience members together in one evanescent afternoon, sharing the sublime shimmer of music and color and a nutty but evergreen story that pokes fun at the powerful and allows the servants to win in a way that teaches the powerful a lesson.

I loved it all so much.

There was a moment during Figaro that I tried to explain later to my husband and son, over the delicious Mother’s Day dinner they had prepared for me: fresh tuna, salad, asparagus; Spring incarnate. But I don’t think I succeeded in conveying to them what I’d felt. It was a moment so full of “saudade,” as Portuguese speakers call it: that overwhelming feeling that has to do with deep longing and nostalgia. It washed over me as I looked around at the many silver heads in the house, and I suddenly thought: I’m now old enough to understand why older people, like my 88-year-old father, love opera so much. It’s because it evokes the intensity of love and grief that elders know so personally and deeply and though the grief is hard, they would never want to not have felt the love. Because life is opera. It’s not just flossing and doing the dishes and dealing with aches and pains and indignities. It’s your heart aching, it’s your soul aching, as you marvel at the swift passage of time. 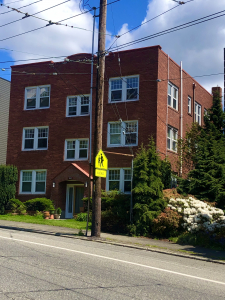 It’s the joy of picking up your phone when your 32-year-old daughter calls, not two minutes after you just passed the apartment building up on Queen Anne Hill which was her first home, where her bedroom was—I’m not kidding—a walk-in closet. It is loving those memories of her as a baby while rejoicing in her now, a grownup soaring confidently into the next chapter of her life. It is the wave of Mother’s Day gratitude for all my years of motherhood mixed with my own human helplessness at the passage of time, and at time’s cruel whims: Putin’s thirst for blood and conquest; our daughters’ autonomy over their own bodies once again gravely threatened.

Voi che sapete, the Count’s young page, Cherubino, sings of his love for the gardener’s daughter. You who know what love is, tell me: what is this yearning, burning in me? What I am experiencing is new and I do not understand it. I have a feeling full of desire, and it is (both) pleasure and suffering. 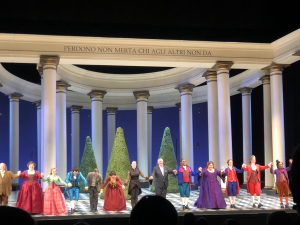 We who qualify for senior rush tickets are Cherubinos no more. We know this blend of pleasure and suffering, this saudade, all too well. But then we go to the opera and we understand how lucky we are to remember strong feelings, and to still feel them. To remember injustice, and outrage. To remember loving, and to still love.

You who know: that would be us.

Seattle-area readers: The Marriage of Figaro continues through May 22.

And: my latest article for 3rd Act Magazine is all about their new national namesake, Thirdact.org, whose goal is to put the activist energy and experience of our generation to work for change.